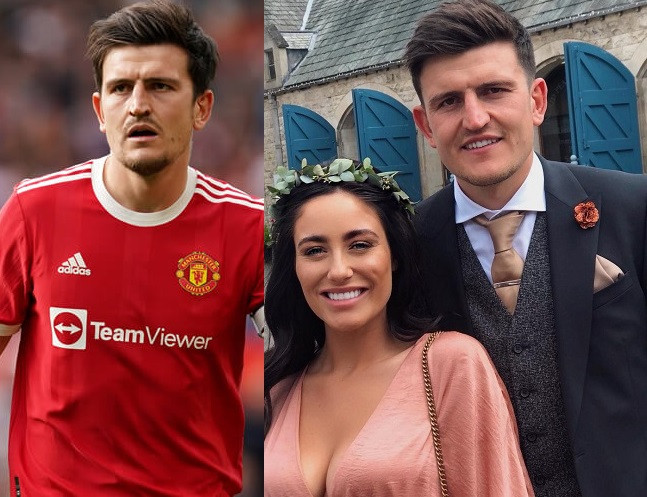 According to The Mirror, the England defender left the Man. United’s Carrington training ground on Thursday May 12, and headed straight to a registry office where Fern was waiting for him.

Details of the wedding were kept top secret even from the guests as attendees were reportedly told the venue of Crewe Registry Office in a text earlier that day.

Harry and Fern, both 29, met when they were teenagers and have been together for the last ten years.

The couple, who have been engaged since 2018, kept details of the ceremony from all but their closest family and friends.

The publication reports that they are planning to take their vows again this summer in a romantic ceremony in France.

Harry was said to have been joined at the ceremony by his parents Zoe and Alan, who travelled from their home near Sheffield.

A source told the publication: ‘It was a closely guarded secret to all but their closest family and friends.

‘They wanted to be officially married in the UK before they head to France. That will be a fairytale wedding day for Fern.’

Harry’s sister Daisy, 21, will reportedly be a bridesmaid at the more lavish ceremony, set to be held at a chateau in Burgundy.

His brothers Joe, 30, and Laurence, 25, will also be in attendance along with his teammate Jordan Pickford – who’s wife Megan Davison will reportedly be another bridesmaid.

Fern and Harry have been dating since they were teenagers and met in their in hometown of Sheffield.

Fern announced their engagement in February 2018, after Harry whisked her off to Paris.

She penned at the time: ‘On Saturday night, Harry made me the happiest girl in the world & asked me to marry him in the most perfect way  #ISAIDYES #TheFutureMrsMaguire #17thFebruary2018’