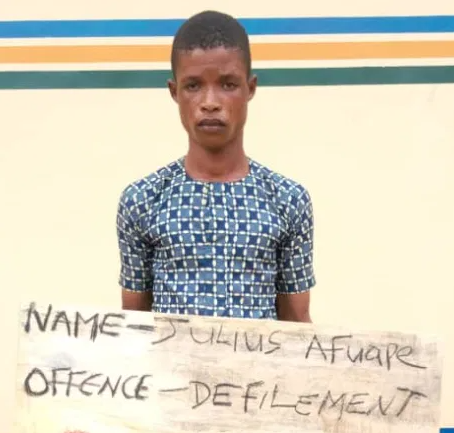 The police in Ogun state have arrested 21-year-old Julius Afuape pictured above for forcefully having carnal knowledge of a 13-year-old girl (name withheld).

A statement released by the command’s spokesperson, DSP Abimbola Oyeyemi, states that Afuape was arrested following a report by the aunty of the victim who reported the matter at Ayetoro divisional headquarters.

Oyeyemi said the aunty of the victim told the police that she came back from work on the 30th of September 2020 at about 3:45 pm only to discover that her 13 years old niece had been sexually abused by the suspect who lives in the same neighborhood with them.

Oyeyemi added that the victim explained that she was alone in the house when the suspect came at about 1:30 pm and claimed that he was sent by the victim’s aunt to come and service her generator.

“It was on that excuse that he was allowed to gain entrance into the apartment. But, on getting inside, he forcefully dragged the victim to her aunty bedroom where he had carnal knowledge of her.

The suspect took to flight immediately after the incident consequent upon which the DPO Ayetoro division, CSP Mobolaji Jimoh directed his detectives to go after him and bring him to justice.

The efforts of the operatives paid off on Friday 2nd of October 2020 when the suspect hideout was located and he was promptly arrested. He has made a confessional statement admitting that he actually committed the crime.

The victim was taken to the general hospital where it was medically confirmed that the victim’s virginity had been broken”. the statement read

Oyeyemi added that the State Commissioner of Police,  Edward Awolowo Ajogun has directed that the suspect be transferred to the anti-human trafficking and child labor unit of the state criminal investigation and intelligence department for further investigation and prosecution. 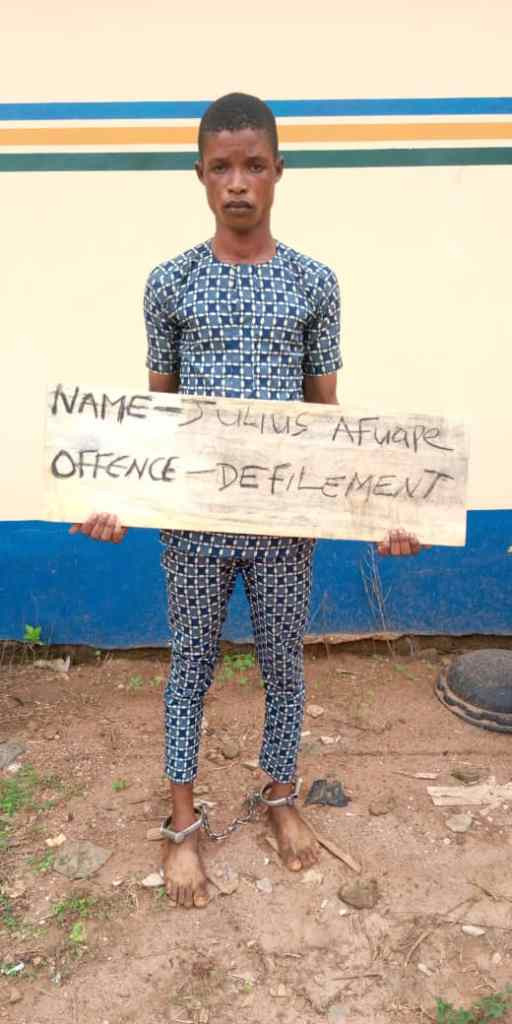