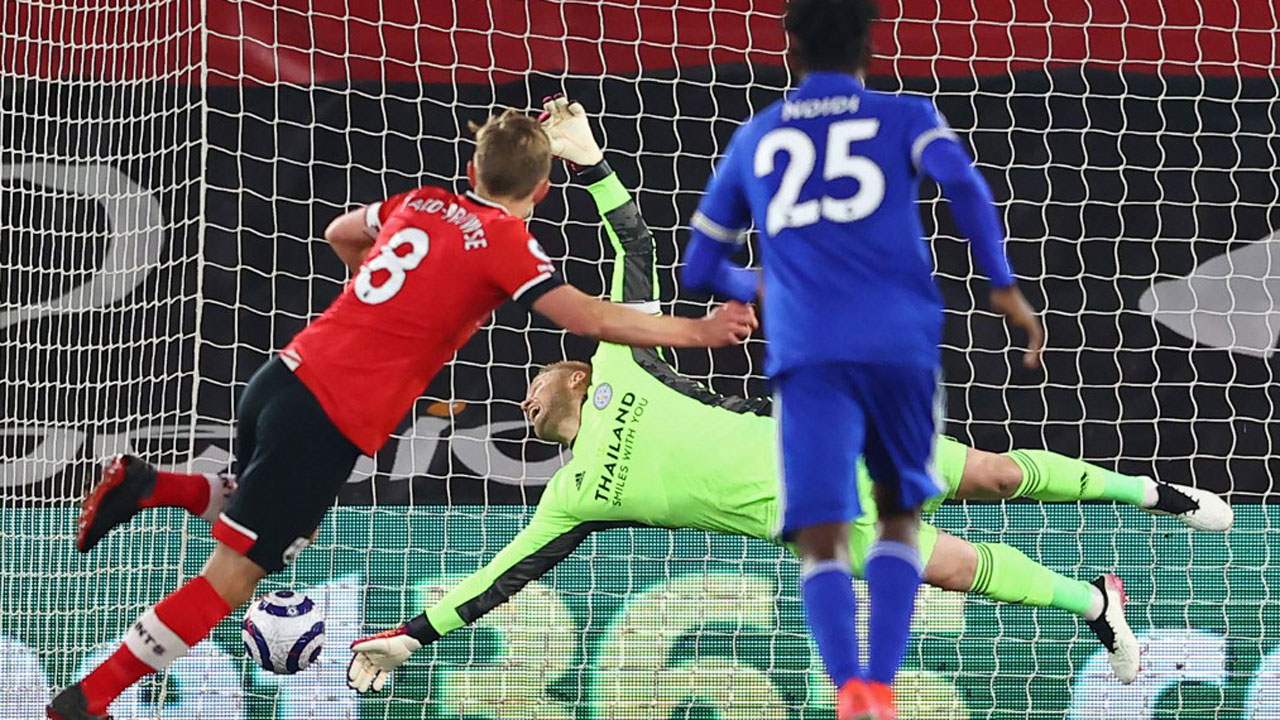 Leicester missed a chance to cement their grip on third place in the Premier League after a 1-1 draw against 10-man Southampton at St Mary’s on Friday.

Southampton had to play 80 minutes without Danish defender Jannik Vestergaard after he was sent off for a foul on Jamie Vardy.

Leicester remain in third place, but fourth placed Chelsea would close the gap to just two points if they beat struggling Fulham on Saturday.

Fourth place will be reduced to a Europa League qualification spot if Chelsea win the Champions League, Arsenal win the Europa League and both clubs finish outside the top four.

So Leicester need to hang onto third place to be sure of qualifying for next season’s Champions League.

Fourth place might still be enough for Brendan Rodgers’ team, but they have only four matches left to guarantee their berth in Europe’s elite club competition.

“A little frustrating, but I don’t think we did enough to win the game. A great opportunity against 10 men and we’re normally very good at that,” Rodgers said.

“Give credit to Southampton, they defended deep and compact but we’re disappointed. The speed was too slow. We didn’t really start to play with that tempo until we got the equaliser.

“When we get back in again on Monday it is another point towards where we want to go. We’ve now got four games to go. We’re in a brilliant position.”

In an FA Cup semi-final rematch after Leicester’s 1-0 win at Wembley two weeks ago, Southampton gave a better account of themselves to end their three-game losing streak.

Defiant Southampton
Leicester had powered to a top-flight away record 9-0 win against Southampton on their previous visit to St Mary’s in 2019.

But they found it much tougher this time and should have been behind early on when Nathan Tella, unmarked eight yards from goal, shot weakly at Leicester keeper Kasper Schmeichel.

Southampton were reduced to 10 men in the 10th minute after Vestergaard’s slip left Vardy clean through on the edge of the penalty area.

Vestergaard responded to his blunder with a desperate lunging tackle, but although the centre-back made contact with the ball, he clattered into Vardy’s ankle in the process, earning a red card from referee Robert Jones.

It took over half an hour for Leicester to carve out a serious chance when Kelechi Iheanacho picked out Youri Tielemans and the Belgian’s low drive forced a fine save from Saints keeper Alex McCarthy at his near post.

Southampton were battling impressively and they took the lead in the 61st minute thanks to a helping hand from Iheanacho.

Stuart Armstrong’s shot thumped into Iheanacho’s out-stretched arm and Jones pointed to the spot, with Ward-Prowse smashing the penalty past Schmeichel for his ninth goal this season.

Finally hitting their stride, Leicester equalised in the 68th minute as Evans met Iheanacho’s pin-point cross with a powerful header that gave McCarthy no chance.

Vardy, set up by James Maddison’s pass, could have won it for Leicester with seven minutes left, but McCarthy made a brilliant save with his legs to repel the close-range effort.