Lebanon on Saturday received its first vaccines against the coronavirus, a day before an inoculation drive kicks off in the crisis-hit Mediterranean country.

A plane landed at the Beirut airport, an AFP correspondent reported, with authorities saying it was carrying 28,500 doses of the Pfizer/BioNTech vaccine flown in from Belgium.

The shipment was the first after the World Bank allocated $34 million to inoculate two million of Lebanon’s six million inhabitants.

Caretaker health minister Hamad Hassan was on the tarmac to welcome the plane and expressed great “relief”. 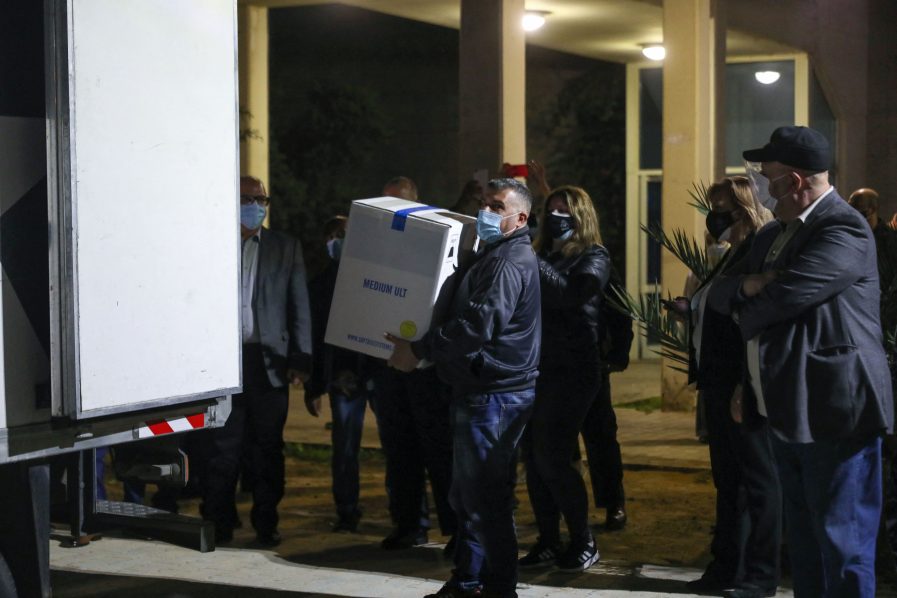 Members of staff unload boxes of the first shipment of the COVID-19 Pfizer-BioNTech vaccine upon arrival to the Rafic Hariri University Hospital in the Lebanese capital Beirut, on February 13, 2021. – Lebanon received its first vaccines against the coronavirus, a day before an inoculation drive kicks off in the crisis-hit Mediterranean country. (Photo by ANWAR AMRO / AFP)

“The vaccine will reach all Lebanese citizens across the country,” as well as Syrian and Palestinian refugees and other residents, he promised.

Lebanon has been under strict lockdown since mid-January, after an unprecedented spike in cases blamed on holiday gatherings that forced overwhelmed hospitals to turn away patients.

Vaccination rollout is set to start on Sunday.

“The best gift one can ask for on Valentine’s Day,” wrote the director of the Rafik Hariri Hospital, Firas Abiad, on Twitter.

Prime minister Hassan Diab, 61, is also to be vaccinated, his office said.

Under Lebanon’s vaccination plan, medical staff and those over the age of 75 are to receive the jab first.

In total, Lebanon hopes to receive around six million vaccine doses, including two million from Pfizer/BioNTech and another 2.7 million via the international Covax distribution programme.

Half a million people in Lebanon have signed up to receive a vaccine, a health ministry official said, although many others are hesitant to get the jab.

Lebanon was already in the throes of its worst economic crisis in decades when Covid-19 hit, and the situation has been exacerbated after a massive blast at Beirut’s port in August killed more than 200 people and destroyed large parts of the capital.

The World Bank and the International Federation of Red Cross and Red Crescent Societies (IFRC) are to monitor the vaccine rollout, they said in a statement on Friday.