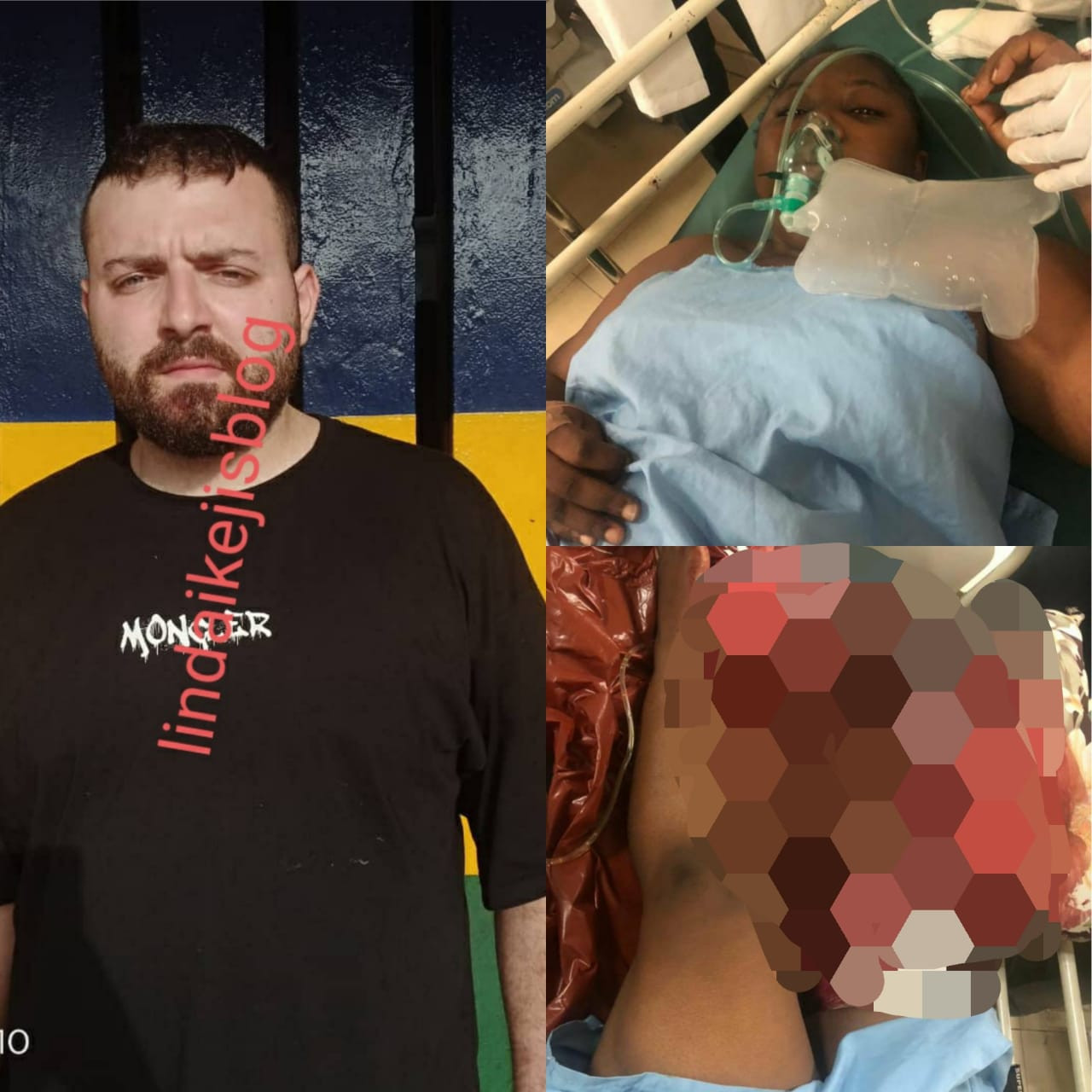 The police in Lagos state has arrested a Lebanese man for allegedly hitting a lady while driving recklessly and against traffic and also absconding after committing the crime.

A Twitter user had shared gory photos of the victim on social media and demanded for justice.

”JUSTICE FOR OMO I just wonder what would made a white guy to drive on a one way street on top speed in VI. He must think that he can get away with anything he does in Nigeria, or he can bribe anyone. This happened this morning.’

Please share and let it go viral so that they don’t release this white driver from the Victoria Island Police Station. The man was driving on a one way road, against traffic and on was on high speed around Sanusi Fafunwa Street, Victoria Island. People had to run helter skelter for their lives.

The driver then drove into Omotola and pushed her against the wall. The impact was so much that the plate number fell off. The driver did a hit and run, he absconded instead of waiting to care. A passer bye took a bike and chased after the him. He was caught, brought back and handed over to the police. Omotola is in critical condition at the Lagos University Teaching Hospital. We seek justice for Omotola and this white man should not be released. #justiceforomotola”

In an update shared this morning, SP Benjamin Hundeyin, spokesperson of the state police command, said the Lebanese man has been arrested while the victim is undergoing treatment at the Lagos State University Teaching Hospital LASUTH.

”On May 4, 2022 at about 0745hrs, a middle aged Lebanese by name John Greg ‘m’ drove a Toyota 4Runner recklessly and against traffic on Sanusi Fafunwa Road thereby hitting one Omotomi Akinsanya ‘f’ which resulted in serious injuries to her leg.

He sped off but was chased and arrested. Suspect in our custody. Vehicle impounded and in our station. Victim undergoing treatment at LASUTH. Victim’s family duly informed. Embassy of Lebanon duly informed. Investigation ongoing.” 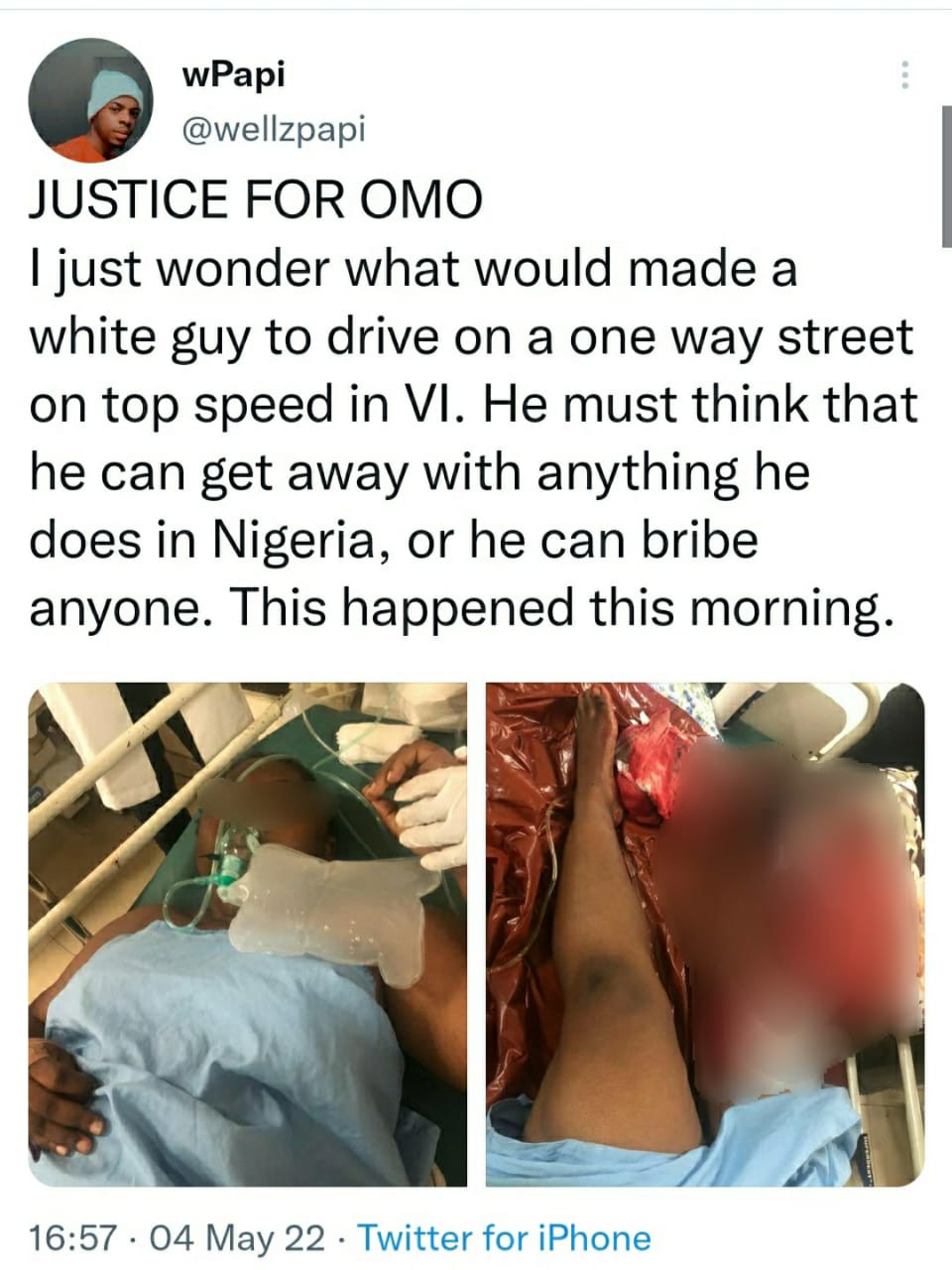 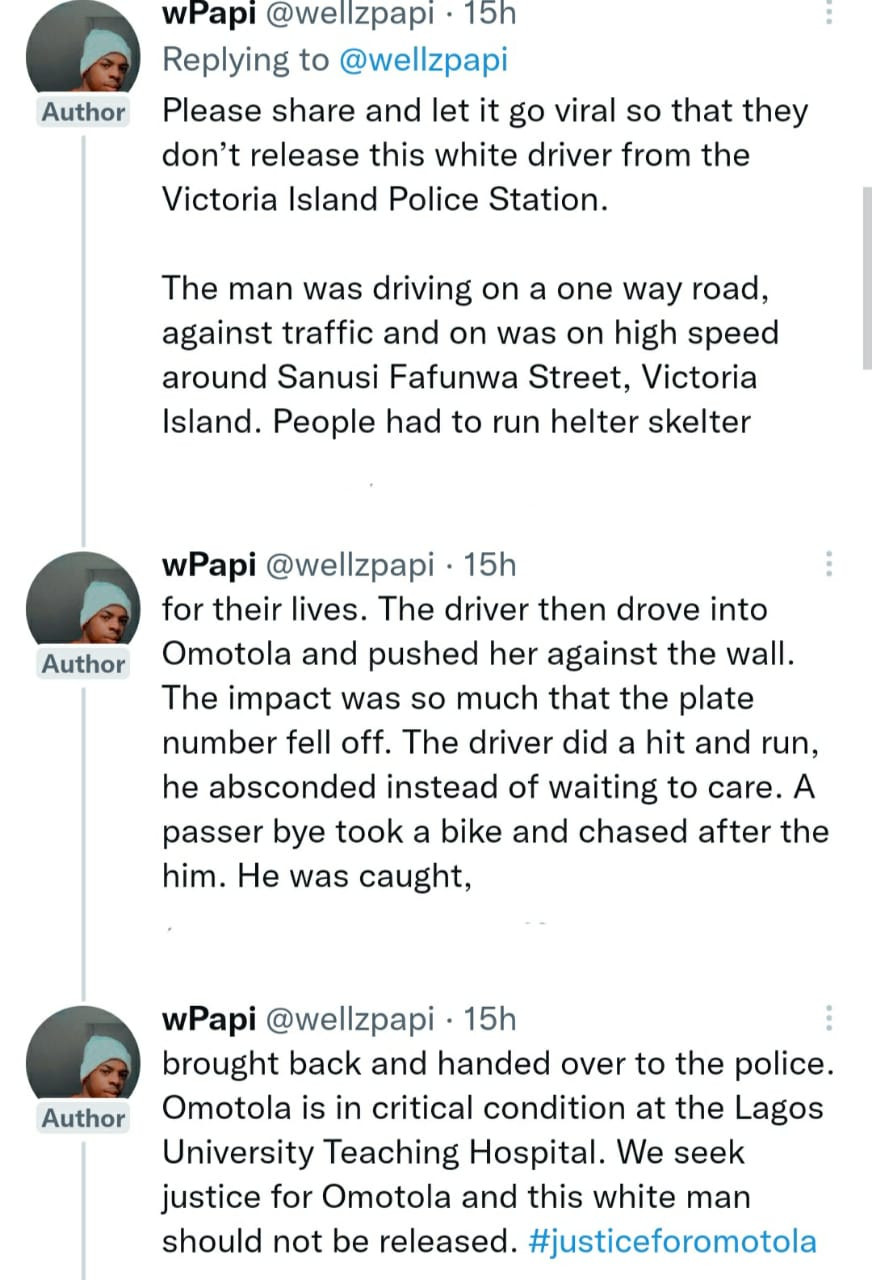 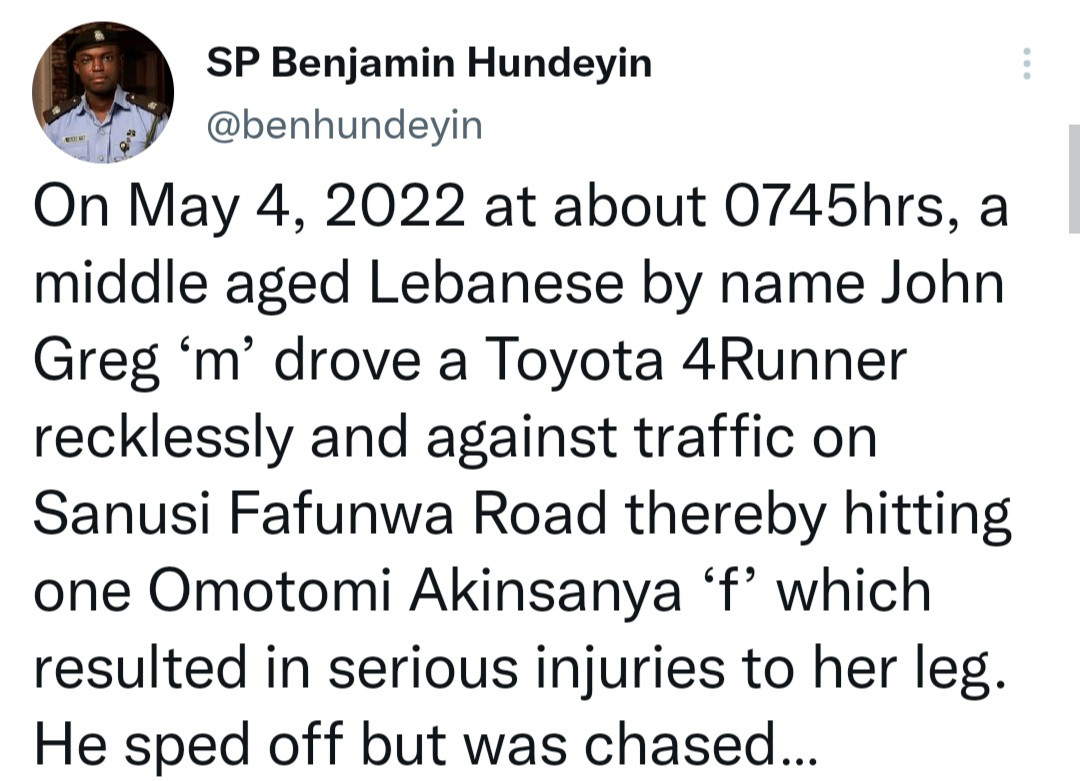 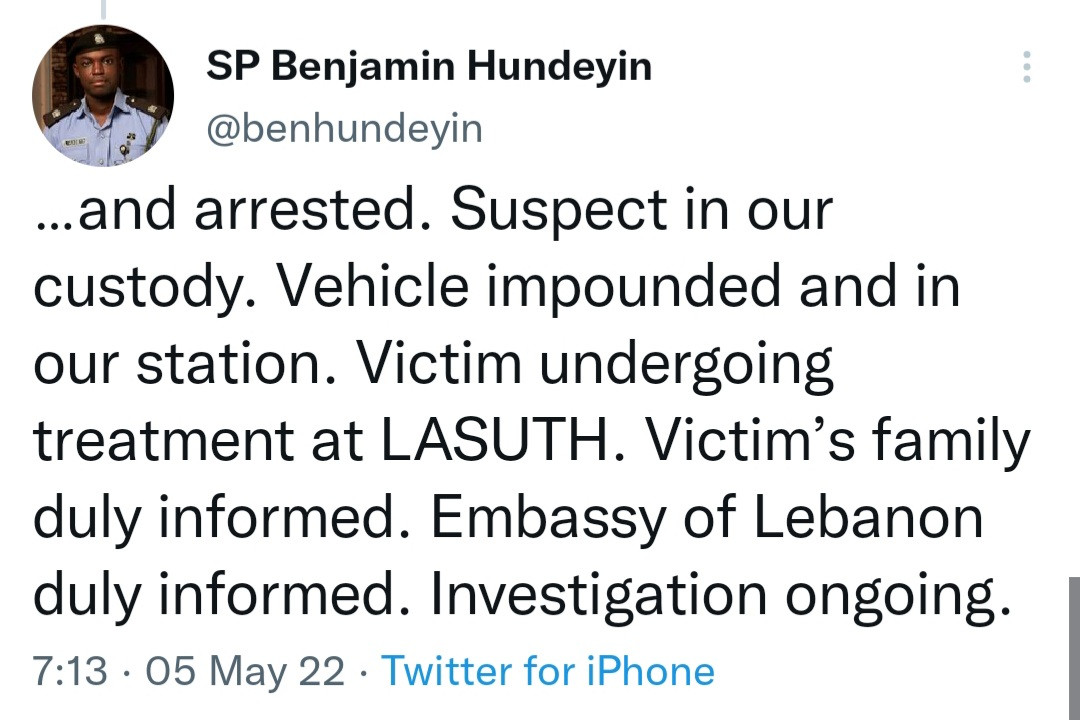 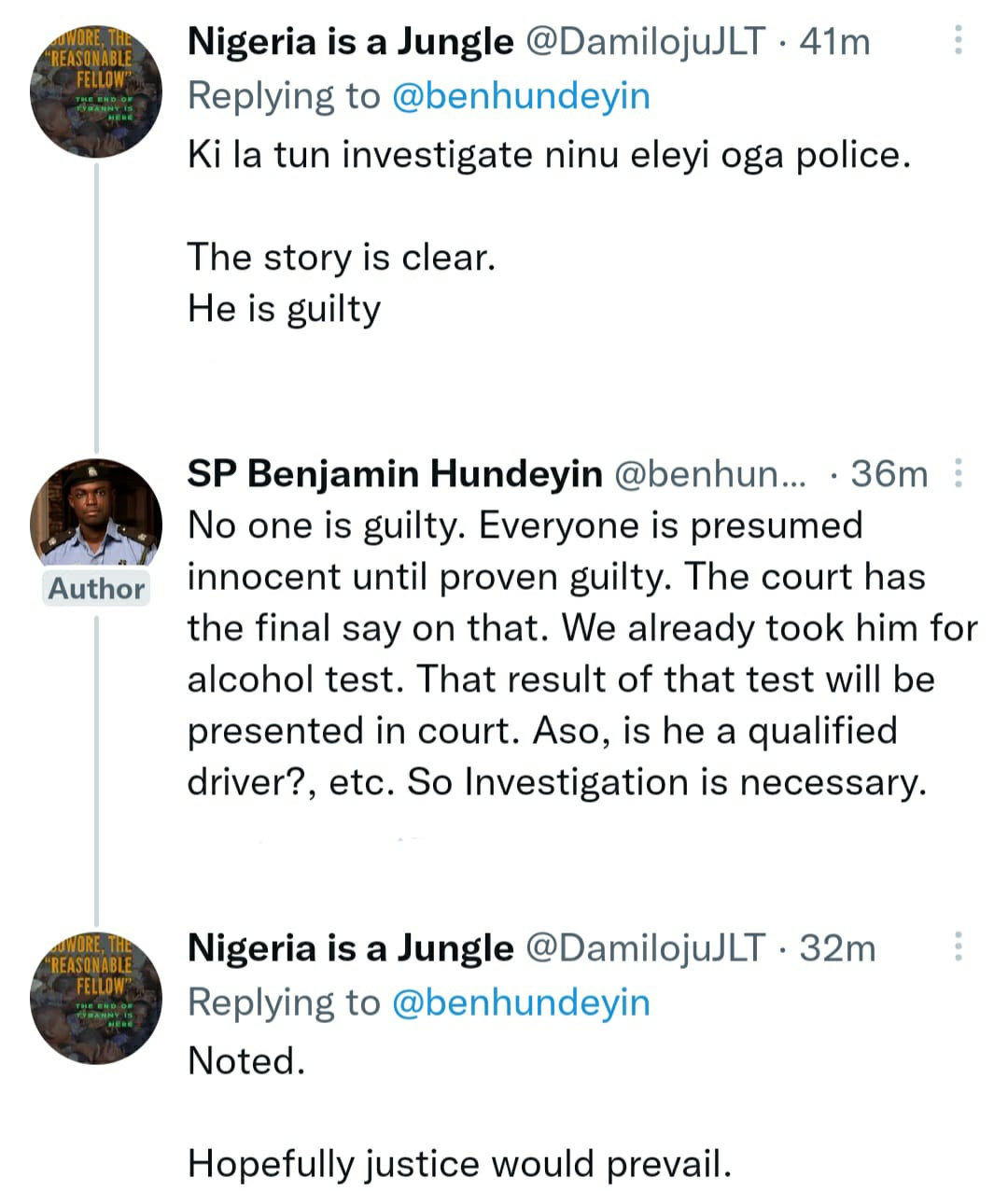