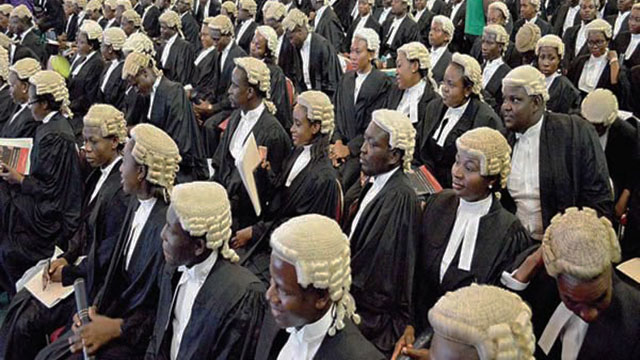 Lawyers drawn from the eight branches of the Nigerian Bar Association (NBA) in Anambra State, have condemned the closure of all the courts in the state due to the strike embarked upon by the Judiciary Staff Union of Nigeria (JUSUN).

The strike, which was started to press home demands for the implementation of financial autonomy for the judiciary began in April, immediately after the Easter festivities has lingered for two months.

Already, the entire Bar branches in Anambra have since staged series of peaceful protest in Awka, during which they mandated the State Governor, Chief Willie Obiano, to move decisively by granting the demand of JUSUN, to pave way for reopening of courts.

Since then, all the courts in Anambra have been under lock and key, such that their premises have been overgrown by weeds. So far, the strike has dealt a heavy blow on members of the public, particularly lawyers, who said they are now living in penury due to lack of income, more so, they are now jobless.

The chairmen and secretaries of the eight branches of the NBA in Anambra, had on
April 16, during a peaceful protest in Awka, jointly urged the governor to address the issue, which led to the strike and grant the demands of the JUSUN.

The Bar leaders said: “Recall that on or about April 16, 2021, the committee of Chairmen and Secretaries of Branches of NBA in Anambra State, held a Press Conference in which, among other issues, we issued an ultimatum to the governor of Anambra State to address and meet the demand of JUSUN.

“On the heels of the said Press Conference came the directive of the President of NBA to all the Branches of the Association to visit their respective states governors and present a uniform demand for the implementation of the constitutional provisions relating to the financial autonomy of the States’ Judiciary.

“The president further directed that we sustain such visit every Monday until the Governors comply.

“We also got an invitation from the Attorney General of the State to have an audience with her. The meeting was held on April 20, 2021. We seized the opportunity to reiterate our demands and our ultimatum. The Attorney General gave us firm assurances that she will deliver our message to the governor un-edited. We kept our fingers crossed hoping that the governor will heed to our demands. We made it clear in our earlier release that in the event that the governor does not comply or make a trustworthy commitment toward the implementation of the constitutional provisions relating to the financial autonomy being demanded by JUSUN, we shall take further action.”

According to them, they followed-up with their struggle by embarking on another protest visit to the governor’s office on May 10, 2021, where they further reeled out their demand, in line with the directive of the NBA President.

Speaking during their second visit to the government house where they were addressed by the Secretary to the State government, Prof. Solo Chukwulobelu, the chairman of Nnewi branch, Awuka, who spoke on behalf of the entire lawyers, had while urged the governor to address issue positively considering the peculiarity of Anambra State where election is around the corner.

Responding on behalf of the State government, Prof. Chukwulobelu, said the demand for financial autonomy was a national issue.
“The fact that the courts are not sitting is a national issue not state driven,” he said.

Prof. Chukwulobelu, disclosed that the state government has worked out an arrangement with the judiciary on how best to share what is received and based on available resources.