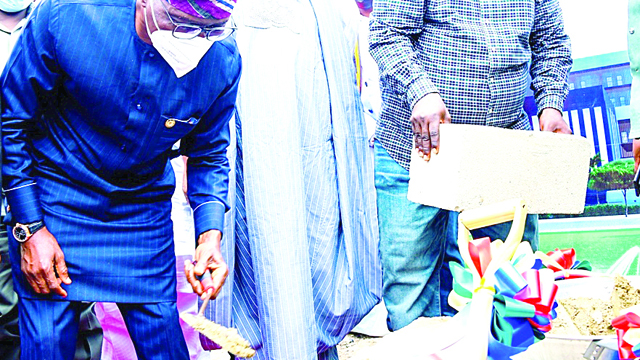 The Lagos State government has jump-started its urban renewal scheme in the Island Central Business District with the commencement of road and health infrastructure in Adeniji Adele and its environs.

Massey Hospital was established in 1914 as the first General Outpatient Clinic and Referral Centre in Lagos State and was converted to a full-fledged Pediatrics Hospital in 1961.

As a result of the steady and increasing number of patients, who throng the hospital daily to access medical services, the capacity has been overstretched and needs to be upgraded to provide quality service to patients.

The seven-storey hospital project would be completed in 24 months and will allow the state to provide medical care to children, a first-class facility for training doctors and other medical caregivers.

To complement the edifice, the roads are to be upgraded to semi-rigid pavement with reinforced concrete drains, culverts and median barrier, service ducts and powered street lighting.

The contract for the urban renewal has been awarded to Messrs Julius Berger Nigeria Plc, which undertook the initial construction of Adeniji Adele Road.

The regeneration of the axis started with the Northern axis, the state set up an inter-ministerial committee comprising, Ministries of Physical Planning and Urban Development, Works and Infrastructure, Environment and Water Resources, Transportation with a consultancy firm of urban and regionals planners.

The firm, MOA Planners Limited initiated the regeneration plan of Lagos Island North Area in August 2020, with an estimated size of 100.42 hectares.

Speaking on the project, Special Adviser to Lagos State Governor on Works and Infrastructure, Aramide Adeyoye, said the projects were another effort to promote economic development and improve the standard of living of Lagosians.

“The roads will be reconstructed and upgraded to the semi-rigid pavement with reinforced concrete drains, culverts and median barrier, Transverse and Longitudinal service ducts and installation of Low Emission Diode (LED) powered street lighting.

Following reports from concerned persons from the community, the agency swung into action to demolish the illegal buildings in the interest of public health and the safety of the community members.

It lamented that some ongoing developments in the area are in deviance to the physical planning Law.

To halt further development of such structures within the community, the joint enforcement team of LASBCA and Physical Planning Permit Authority, (LASPPPA) served abatement notices and pull down structures illegally erected beside a government primary school along the community’s shoreline.

Speaking during the exercise, LASBCA General Manager, Gbolahan Oki, said that if the illegal developments were not checked, such structures would pose a huge threat to residents, distort the aesthetics of the community and threaten the security architecture of the area.

He explained that the enforcement in the coastal area of Ibeshe Okun community shows that the agency has gone a step further in establishing its presence across all parts of the state, including the riverine areas and the hinterlands.

Speaking on the building that was pulled down by the enforcement team of the agency during the exercise, Oki stated that the building, which was used as a poultry house behind a primary school in the community, constitutes a huge health risk to the school children and their teachers.

IN a related development, the state’s Ministry of Physical Planning and Urban Development has extended development plans to 30 communities, spread across different councils.

The Commissioner for Physical Planning and Urban Development, Dr. Idris Salako, who made this known during the 2021 Ministerial Press Briefing in Alausa, stated the ministry prepared local/ action plans for the communities through LASPPPA.

The communities that have had their plans prepared are Lafiaji in Eko District, Abule Oja, Ajiwe, review of Maiyegun and plan of an extension to Aparakaja Casia/Abiodun Dada.

The Commissioner also explained that the development plans would bring about the provision of quality infrastructural developments within the planned area and guarantee a sustainable physical environment during the stipulated planning period.

“With due recognition of the need to extend physical planning administration to non-schemed areas, development guide plans are being prepared to make the excised villages more sustainable,” he said.