A KFC worker in Tennessee has been praised for saving a kidnapped woman after spotting a chilling note in the trash.

The woman left a note behind among the KFC wrappers from an eaten meal telling someone that she needed help.

The quick-thinking employee found the note then reported a possible kidnapping, as well as a description of the pair to local police.

Diego Glay, 23, was arrested in Memphis and charged with kidnapping and evading arrest after a short police chase.

A police spokesman said on Facebook: “Officers were advised that a female had written a note begging for help.

“The female that wrote the note was still on the business lot accompanied by a male.

“As officers approached the couple, the man ran on foot.

“After a brief foot chase, he was apprehended and identified as Diego Glay.” 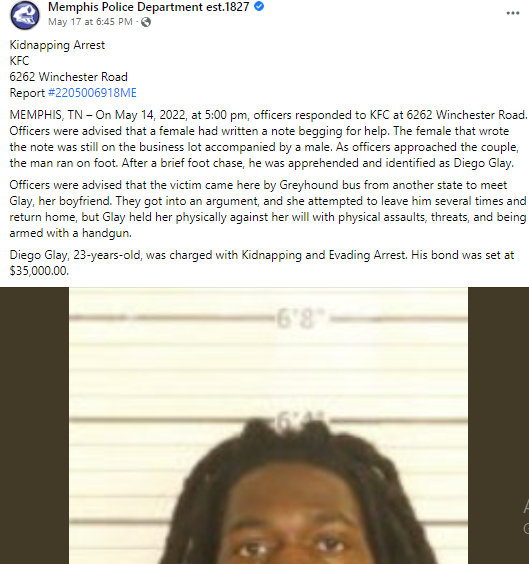 The woman had allegedly gone to meet Mr Glay who she claimed was her boyfriend. However, they got into an argument shortly after meeting.

The police added: “She attempted to leave him several times and return home, but Glay held her physically against her will with physical assaults, threats, and being armed with a handgun.”

The woman admitted that she was a victim of abuse, assault and threats, and that he had punched her in the face when she tried to leave.

The man was found with a handgun on him and is being held in custody at Shelby County Jail on a £28,000 bond.