The Police in the Federal Capital Territory (FCT) has invited activists planning to protest the death of Keren Akpagher.

The deceased was a Senior Secondary School One student of Premiere Academy in Lugbe, Abuja.

Keren was allegedly raped by persons yet to be identified. Her story irked Nigerians who are alarmed by the increase in cases of sexual assault.

On Thursday, the Police, in a memo with Ref. No. 3000/FCT/X/D9/ VoL 62/38, invited the persons leading the demonstration scheduled for Friday.

The Police letter was signed by Pam Joseph, a Deputy Commissioner of Police at the Criminal Investigation Department, FCT Command.

Lemmy Ugbhegbe, head of Coalition Against Gender-Based Violence and Convener, Men Against Rape Foundation was asked to appear for “inciting public disturbance.”

Security operatives reportedly tracked Ugbhegbe to the private school being run by his wife.

Keren passed away on June 22, 2021 after suffering hyperglycemia triggered by sepsis, an infection caused by the condom found in her.

The management of Premiere had denied that the autopsy result in the death of Keren indicted the school.

The FCT Police is carrying out a probe, according to ASP Mariam Yusuf, Public Relations Officer.

Commissioner of Police, Bala Ciroma assured the public that the command will be professional, fair, and thorough in its investigation.

The CP appealed to everyone concerned to remain calm, allow the law to take its course, and await further updates. 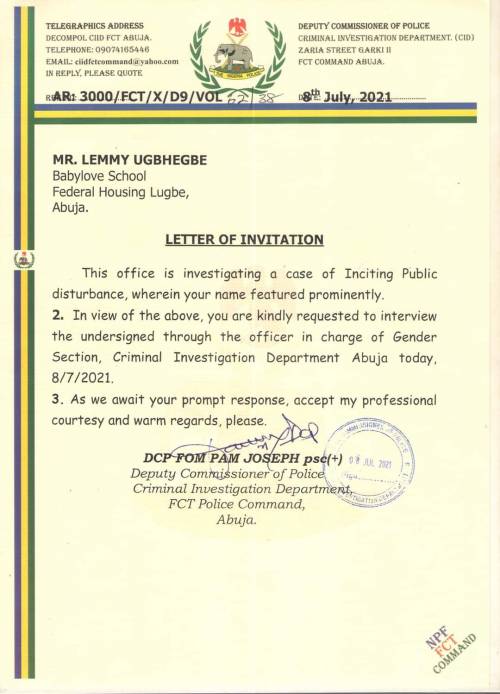