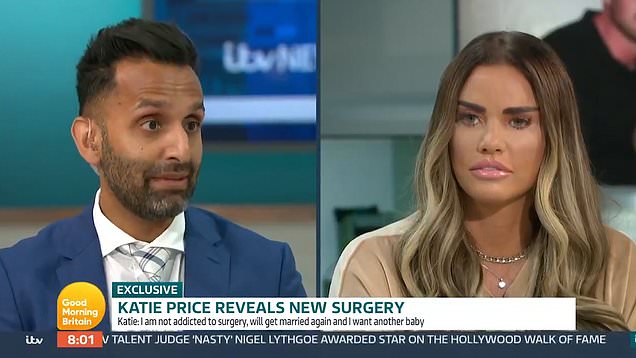 Katie Price has defended her controversial trip to Turkey, which is on the travel red-list for the UK, to have her latest round of cosmetic surgery including ‘full body lipo and some of my own fat put in my bum’.

The reality star and former model showed off the results of the latest procedures on Friday and was grilled by Good Morning Britain’s Kate Garraway and Dr Amir Khan on travelling abroad in order to have them.

She said the situation is ‘serious’ and insisted she took steps to ensure her trip was safe.

The star explained: ‘I went to a red country, but at the same time I’m working, I’m doing my YouTube.

‘You have to follow the protocol, you can’t be silly, so I knew by going to a red country I’d literally be in a hospital, I wasn’t mixing with anyone else.

‘It was literally hospital, then we flew to an amber (list) country, stayed in a villa in the middle of the hills away from everyone.

‘We made sure all our shopping was there and then came home.

‘We didn’t muck about at all with it and you can’t, it’s serious.’

Katie added that she would not have done it if she had not had two coronavirus jabs.

Arrivals into the UK who have been in a red-listed country in the last 10 days must quarantine in a hotel.

Anyone entering the UK from an amber-listed country must quarantine for 10 days at home or in the place they are staying.

Appearing on the breakfast programme, Katie detailed the latest round of surgeries, and insisted she wasn’t addicted to going under the knife.

She explained: ‘It’s like a car, you have an MoT, if you get a scratch or a dent on your car, you fix it, and that’s how I feel about my body.

‘I’m not trying to look younger and I definitely don’t want to have that alien look, you know when you can see some people have gone over the top.’

‘I am not addicted,’ Katie added, saying that she ‘doesn’t want to look like a freak’.


MORE : Katie Price won’t allow youngest children to see her after recent cosmetic surgery as she reveals she ‘looked like a monster’