A mild drama occurred at the Kaduna State University matriculation funfair on Tuesday, October 12 when some students of the institution battled it out with cadets of the Nigerian Defence Academy (NDA), leading to the destruction of their vehicle.

The cadets, numbering about four said to be in their second year were had gone to KASU for the matriculation funfair, which featured live performance, face painting, dance and a host of other activities. 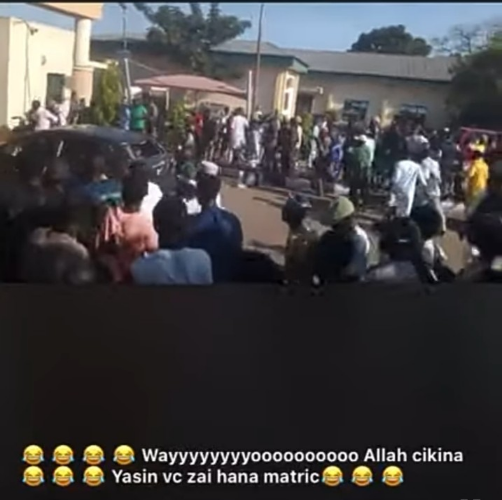 According to a source, the cadets saw a female student hanging out with her boyfriend and one of them tried to woo her by asking for her contact details, which she declined. Despite her refusal, the cadet was said to have insisted on getting the girl’s number which prompted her boyfriend, a fellow student of the institution to intervene.

Instead of walking away, one of the cadets was said to have slapped the student which drew the attention of his fellow students who then descended on the cadets with stones and sticks. The cadets were unable to escape from the attack as the students lock the school gates.

They pelted the vehicle with broken pieces of interlock. One of the cadets who couldn’t get into the car on time was severely beaten.

“They luckily escaped after the security personnel at KASU opened the gates,” – eyewitness.

Four students who were reading partners in school, celebrate as they graduate from the university