The National Association of Kaduna State Students, NAKASS, the umbrella body of all indigenous students in Kaduna State, including their unions and associations, studying both in Nigeria and in the diaspora, has honoured distinguished Senator Laah Danjuma Tella, the Senator representing Kaduna South senatorial district at the National Assembly with an Award of Excellence.

The Award was presented to the Senator on February 17, 2022, at the A.A Ladan Hall, Federal College of Education, Zaria during a programme organized by NAKASS with the theme,”Effective Students Leadership in the 21st Century.”

According to the organizers, Senator La’ah was given the award due to his contribution towards the development of education in Kaduna State before and while holding elective positions.

The students highlighted the justification for his award as follows:

Before he became a senator in 2015, his passion for education led him to build a Junior Secondary school from scratch to finish and donated it to his home community. The school is currently graduating students.

The Senator during his first year in office, spearheaded an emergency intervention where 16 primary schools {2 per Local Governments} were earmarked and given a complete overhaul.

The Senator also attracted the Police Secondary School in Tum Kagoro Kaura LGÀ. This School is one of the selected few in the entire country, which is specially meant to train young men and women with the aim of producing best brains who may wish to join the Nigerian Police Force. It is now in session with close to 800 pupils. The institution which was approved with The Police Primary School now situated in Jema’a LGA. 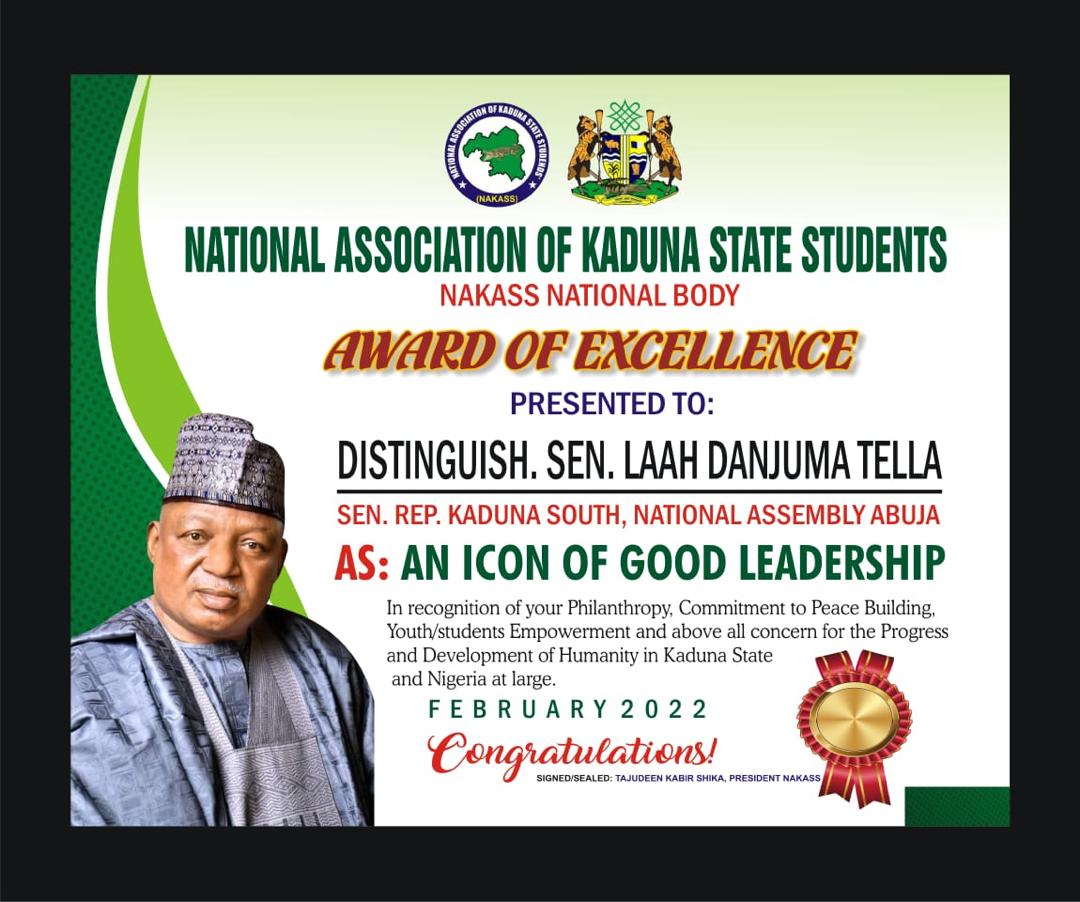 Distinguished Senator La’ah sought and obtained approval for an outreach campus in collaboration with the National Open University of Nigeria (NOUN) for the benefit of his constituents. This Campus boasts of state of the art buildings, computers and gadgetry especially configured for long distance learning. The entire structure was constructed and furnished by him. It has been opened to the general public. This centre has graduated the first set of students in 2021 and will graduate the 2022 set.

The Senator has also turned his searchlight towards library complex of Kaduna State University {KASU}, Kafanchan campus. He constructed shelves and also donated books. He planted a 60KVA to supply power for the library complex. He dug a borehole with an overhead tank of 10 thousand gallons/45 thousand liters. He supplied 50 ceiling fans and 45 air conditioners to create a conducive research environment for the students. The entire complex was landscaped and interlocked by him.

He has awarded scholarships and provided educational support to hundreds of students from different institutions which help facilitate their educational pursuits.

The senator sponsored the Bill on Upgrading The Federal School of Statistics, Manchok to A Federal University of Science and Technology which has passed through the First, Second and Third readings and has been harmonized and adopted by both chambers of the National Assembly awaiting Presidential Assent. If passed into law, it will help the constituents meet their educational and economic needs.

During the award presentation, the students’ body hailed the senator for his track-records of performance, saying that he deserves even more recognitions.

Receiving the award, the senator thanked the students for their recognition, assuring them that it was a propeller that will push him to affect the society more positively.

He charged them to be ambassadors of peace even as they go about studying in their various fields.

He urged them not to leave politics to politicians, but to get their PVC in order to have a say in the scheme of things.