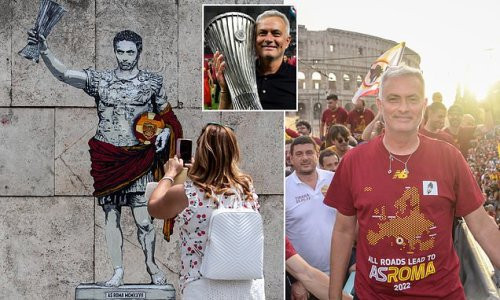 Jose Mourinho has been immortalised with a mural depicting him as a Roman emperor following Roma’s Europa Conference League glory.

The Portuguese manager became the second manager to win five major European titles after Giovanni Trapattoni after he led the Serie A side to win their first trophy in 14 years on Wednesday after beating Feyenoord 1-0 thanks to Nicolo Zaniolo’s 32nd-minute strike.

Fans then showed their appreciation for manager Mourinho by creating a mural that depicts the legendary coach as an emperor holding the trophy in the air. 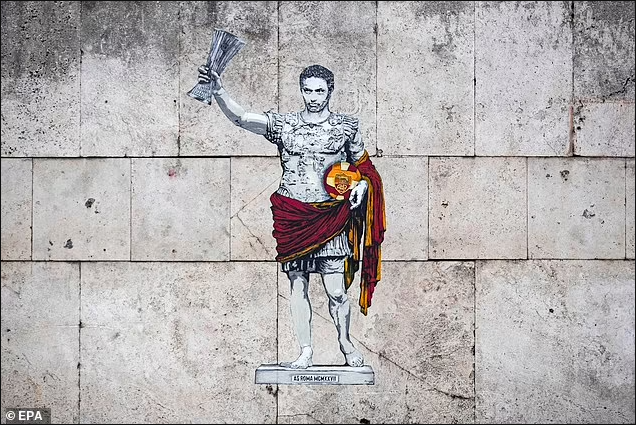 Mourinho has now won the fifth European trophy of his legendary managerial career.

At Porto, he won a UEFA Cup and Champions League. He also won Europe’s premier competition at Inter Milan in 2010 and then the Europa League during this time at Manchester United.

He has won every major European final he has contested.

The trophy ensures that he has won at least one trophy at every club, apart from Tottenham, since his time at Porto.

Mourinho broke down in tears after securing the continental title, and was mobbed by his joyous stars, who sprayed him with water, danced around and sung ‘campiones, campiones, ole, ole, ole’.

After the game, Mourinho told Sky Sports Italia: ‘There are so many things going through my head. So many things at the same time. I’ve been at Roma for 11 months, I realised the moment I arrived what it mean, they were waiting for this. As I told the lads in the locker room in Turin, we did what we needed to do.

‘This was not work tonight, this was history. We had to write history. We wrote it. The Conference League is a competition that we had the sensation from the start we could win, but it got a stronger competition when the Europa League teams came in, Leicester City, Olympique Marseille and Feyenoord. We put so much into this.

‘Now I am staying, there are no doubts. Even if some rumours emerge, I only want to remain at Roma.

‘We must understand what our owners, who are fantastic people, want to do next season, we can build a really strong project with honest professionals.

‘Of course, I feel like a Romanista… I am fan of Porto, Inter, Chelsea, I am crazy about Real Madrid, I am now a Roma fan, I belong to all those clubs because we had these moments together. Tonight, with all due respect for all the clubs I worked for before, I am 100 per cent Romanista, because these fans are truly incredible.’