Debutants Gambia beat Mauritania 1-0 on Wednesday in an Africa Cup of Nations Group F match in Limbe overshadowed by the bizarre finish to an earlier game that Mali won by the same score against Tunisia.

A Gambian throw-in began a move that finished with Ablie Jallow slamming a rising shot over goalkeeper Diop Babacar, who had strayed slightly off his line.

Coached by widely travelled Belgian Tom Saintfiet, Gambia are competing in the flagship African tournament for the first time after 16 failed attempts to qualify. 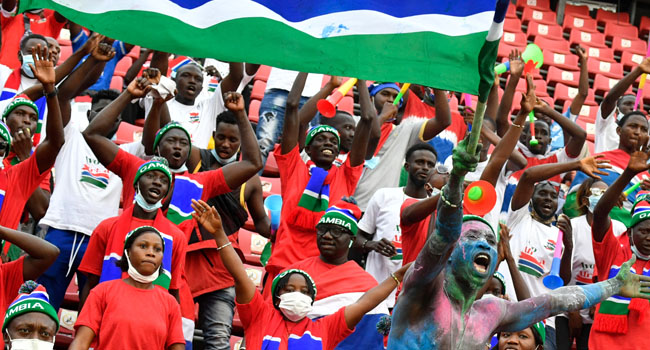 Gambia’s supporters react before the Group F Africa Cup of Nations (CAN) 2021 football match between Mauritania and Gambia at Limbe Omnisport Stadium in Limbe on January 12, 2022.
Issouf SANOGO / AFP

The second half of the matchday 1 double-header at the Stade Omnisport was delayed 45 minutes because the referee of the first game mistakenly finished it three minutes early.

There was a further hold-up before Gambia and Mauritania could start the clash of minnows as two unsuccessful attempts were made to play the Mauritanian national anthem.

A third effort was swiftly abandoned after the former anthem of the northwestern country was played once again. The Mauritanian team then stood and applauded before the Gambian anthem rang out. 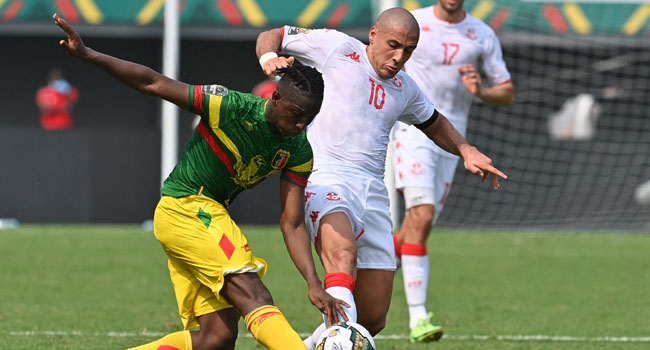 Mali’s midfielder Amadou Haidara (L) fights for the ball with Tunisia’s forward Wahbi Khazri during the Group F Africa Cup of Nations (CAN) 2021 football match between Tunisia and Mali at Limbe Omnisport Stadium in Limbe on January 12, 2022. Issouf SANOGO / AFP

Earlier, Zambian referee Janny Sikazwe signalled for full-time after 89 minutes and 47 seconds when the match was scheduled to last 93 minutes, including added time.

Amid protests from many furious Tunisians, including coach Mondher Kebaier, the match officials walked off escorted by security officials.

During a subsequent press conference at the Stade Omnisport in the southwestern city, the teams were informed that the match must resume as it had ended prematurely.

Mali complied, but Tunisia did not as the players were in ice baths, according to Kebaier, who is in charge of a team at the Cup of Nations for the first time.

“In 30 years in this business I have never seen anything like it,” said the 51-year-old, who replaced former France star Alain Giresse after Tunisia finished fourth at the last Cup of Nations in 2019.

The refusal of Tunisia to return to the pitch could expose them to sanctions from the tournament organisers, the Confederation of African Football (CAF).