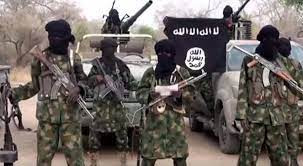 Leadership reports that the terrorists attacked the military base in Gamboru Central Primary School and dislodged personnel of the Nigerian Army (NA). The terrorists reportedly burnt down the security facility in a reprisal attack following military onslaughts in the Lake Chad region.

The devastating offensives of Nigerian troops led to the killing of many terrorist commanders and fighters in Lake Chad Basin (LCB) and Sambisa forest.

Just last week, Nigerian Military airstrikes eliminated Amir Buba Danfulani and four other notorious ISWAP commanders in Tumbuns and Sambisa axis. Danfulani was a senior ISWAP Commander saddled with indoctrinating Fulanis and herdsmen in joining a terrorist group. He also coordinated activities of the terrorists ranging from the deployment of spies as well as tax collectors.

It was gathered that the terrorists got upset, and targeted the military base. They were said to have fired explosives into Ngala town at the weekend which also resulted in the killing of one civilian while six persons were injured.

The Nigerian Defence Headquarters is yet to comment on this development.