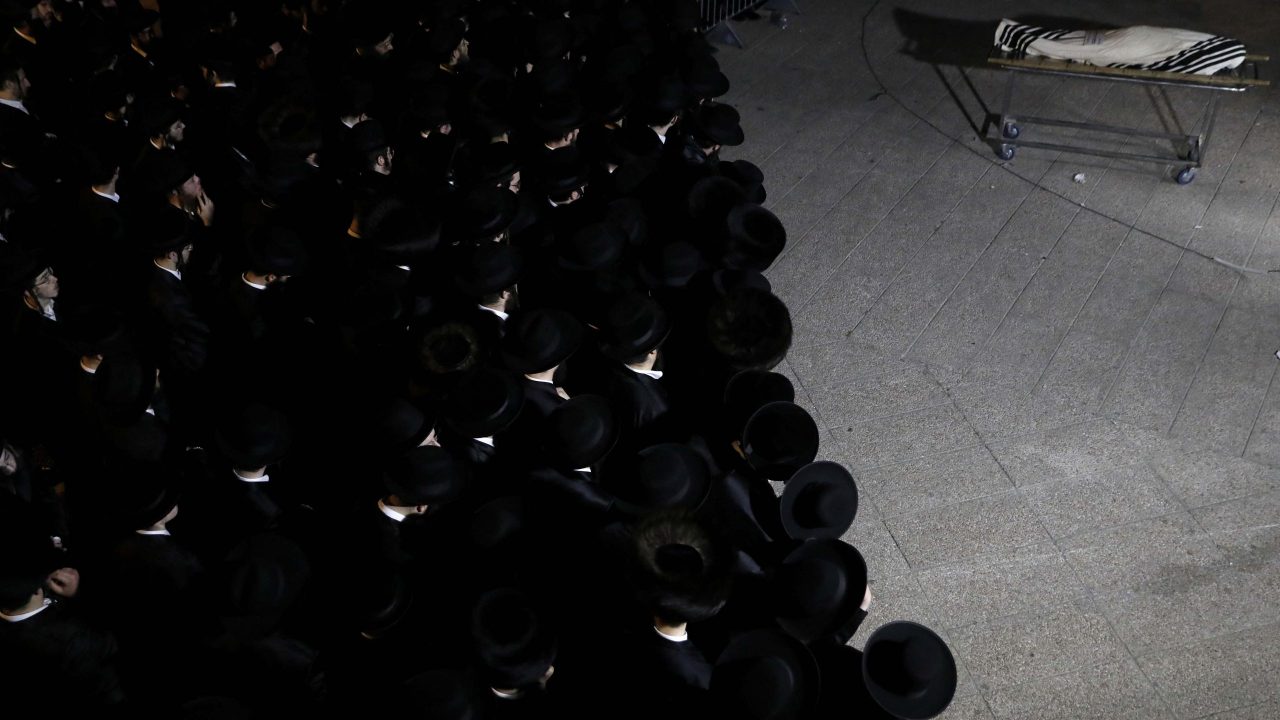 Ultra-Orthodox Jewish men take part in a funeral ceremony in Jerusalem for a victim of a stampede during a religious gathering in northern Israel, on May 1, 2021. – Israel resumed funerals for victims of a stampede that killed 45 people at a Jewish pilgrimage site, one of the nation’s worst peacetime disasters. Tens of thousands of people had thronged to Mount Meron in northern Israel and the reputed tomb of Rabbi Shimon Bar Yochai on April 29 to mark the Lag BaOmer holiday and commemorate the second-century Talmudic sage’s death. (Photo by GIL COHEN-MAGEN / AFP)

Flags were flown at half-mast Sunday as Israel held a national day of mourning for 45 men and boys killed in a stampede at a packed Jewish festival.

The deadly crush on Friday night at Mount Meron in northern Israel has been described as one of the worst peacetime disasters since the nation’s founding in 1948.

At least 16 children and teens figured among those killed.

The fatalities included nine foreign nationals from the US, Canada, Argentina and the UK, as well as two French-Israeli brothers, both minors.

The stampede broke out as tens of thousands of mostly ultra-Orthodox Jews thronged the reputed tomb of Rabbi Shimon Bar Yochai to commemorate the second-century Talmudic sage’s death and mark Lag BaOmer holidays.

“Only a state commission of inquiry could take into account all elements of the disaster, since it has the broadest authority and tools to make the necessary recommendations,” Gantz said in a letter distributed to reporters.

Netanyahu has pledged a full investigation and multiple lawmakers have called for a formal commission of inquiry.

With the blue-and-white Israeli flag lowered outside public buildings, army bases and overseas embassies, calls for accountability were mounting Sunday.

“Take Responsibility,” read the headline in Yediot Aharonot daily, listing a range of officials with questions to answer.

The pilgrimage site was tightly restricted last year due to the coronavirus pandemic.

There had been warnings about viral transmission again this year.

But with Israel having fully inoculated more than half of its 9.3 million residents, police did not stop the massive crowd even as it far exceeded the recommended health guidelines of 10,000 people at outdoor gatherings.

Beyond Covid risks, government agencies had sounded the alarm through the years on crowds that could approach half a million people at a site with flimsy infrastructure.

In a 2008 report, Israel’s state comptroller had warned “the tomb of Rabbi Shimon Bar Yochai is not prepared properly to take in tens and hundreds of thousands of people who arrive for mass events.”

In another report filed three years later, the comptroller found maintenance at the site was limited and numerous additions had been built illegally “that were likely to endanger” people inside.

Public Security Minister Amir Ohana, a close ally of Prime Minister Benjamin Netanyahu, said in a Facebook post that he was willing to face an inquiry.

“I’m responsible, but responsibility does not mean guilt,” he wrote.

Transport Minister Miri Regev has been facing criticism for allegedly allowing scores of public buses to carry people to the site, in defiance of safety concerns.

Netanyahu on Sunday avoided further public comment on the volatile issue in a visit to a hospital treating people wounded in the disaster.

“We’re praying for them,” he said in a video issued by his office. “Our hearts are with the wounded and we all wish them health,” he said.

The stampede in the male section of the gender-divided site is believed to have started as people moved through a narrow passageway that became a deadly choke-point.

Dvir Hadani, a 30-year-old who attended a memorial service in Tel Aviv, recounted an excruciating wait as he tried to contact his father, a rabbi in Meron, who had been at the site.

“They were nerve-wracking hours until we made contact and I realised he was fine, thank God,” Hadani told AFP.

Rachel, a 28 year-old ultra-Orthodox Jewish woman, said she had stopped going to the Meron pilgrimage eight years ago but her parents were there this year and left “an hour before” the stampede.

Some families managed to bury their dead before the Sabbath began on Friday evening.

Funerals continued late Saturday and Sunday, as the Abu Kabir National Center of Forensic Medicine said that all the dead had been identified.

On Sunday, Pope Francis joined world leaders sending condolences, expressing his solidarity with the Israeli people and pledging his “remembrance in prayer for the victims of this tragedy” and their families.