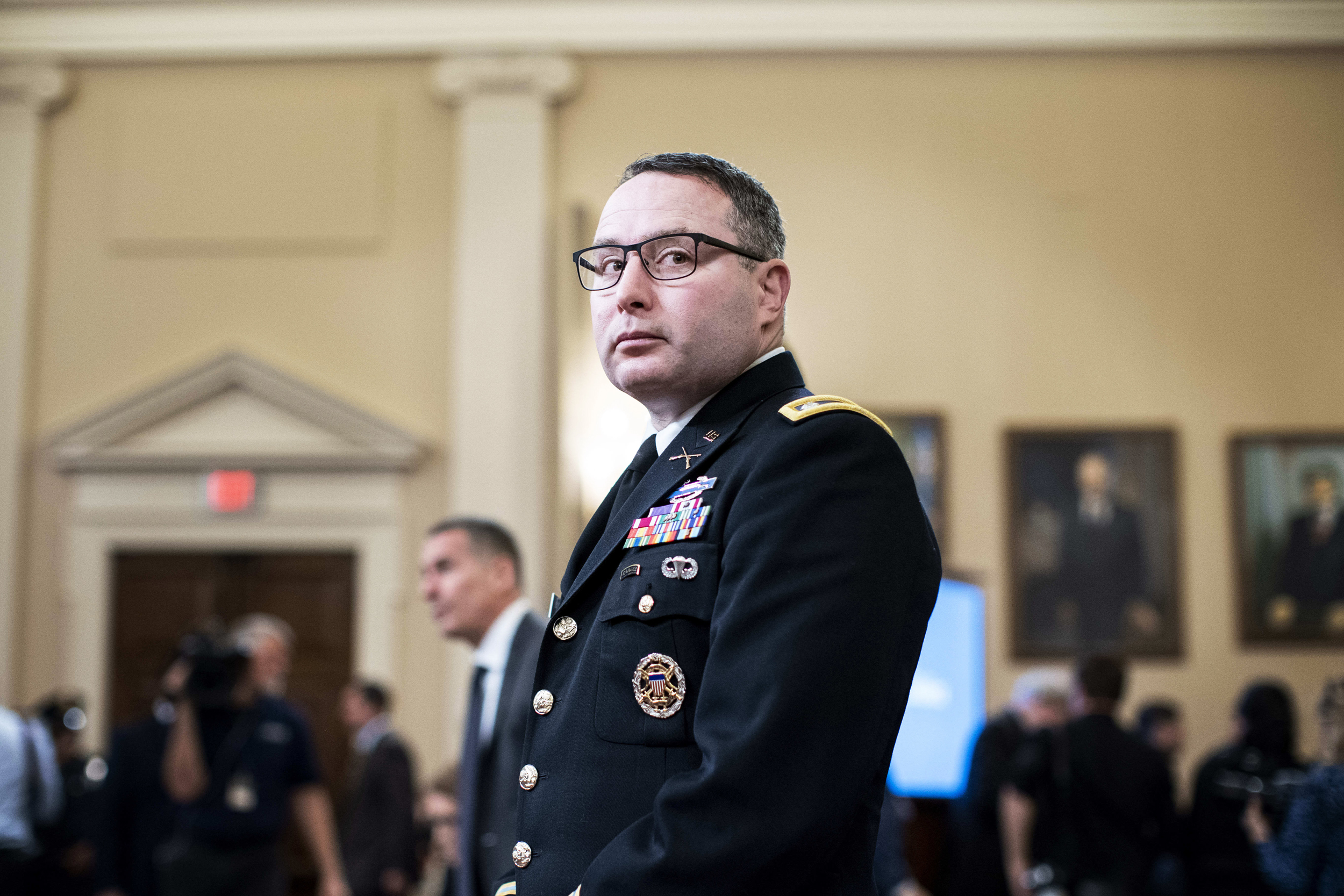 Retired Army Lt. Col. Alexander Vindman filed a lawsuit Wednesday against Donald Trump Jr., Rudy Giuliani and two allies, alleging that the group conspired to intimidate him out of testifying at the former president’s impeachment proceedings and retaliated against him after he did.

The intimidation campaign was “designed to inflict maximum damage by creating and spreading disinformation” that would be repeated on Fox News and other right-wing outlets, Vindman alleges in his lawsuit, which was filed in federal court in Washington, D.C. The suit claims the intimidation campaign “destroyed” his ability to continue his career in national security and ultimately led to his retirement from the military.

Former President Donald Trump is not a defendant in the suit, but Vindman alleges he played a key role.

The “coordinated campaign was the result of a common understanding and agreement among and between President Trump, Defendants, and others comprising a close group of aides and associates inside and outside of the White House, to target Lt. Col. Vindman in a specific way for the specific purpose of intimidation and retaliation,” the suit says.

In the suit, Vindman, who was working in the White House as the top Ukraine expert on the National Security Council, said his problems began after he was subpoenaed by House investigators to testify about a July 25, 2019, call between Trump and Ukrainian President Volodymyr Zelenskyy.

Vindman, who listened in on the call as part of his duties, testified that he thought Trump’s attempt to persuade Zelenskyy to investigate Joe Biden and his son Hunter was “improper” and “inappropriate.”

The suit says Trump Jr., Giuliani, White House social media director Dan Scavino and deputy White House communications director Julia Hahn tried to discredit Vindman and worked together in a “concerted effort to falsely portray Lt. Col. Vindman as disloyal to the United States, as a spy for a foreign country, and as a politically motivated saboteur. They further conspired to falsely accuse him of leaking classified information and perjury.”

The suit does not cite any specific examples of the four having meetings or contact to coordinate attacks but notes that Trump Jr. and Giuliani repeatedly echoed the president’s tweets about Vindman, which may have been written by Scavino. Hahn, the suit alleges, put out “talking points” attacking Vindman’s credibility.

“It is implausible that there would not be a high degree of coordination by the White House and close allies responding to a presidential impeachment,” the suit says.

Trump’s office, the Trump Organization — where Trump, Jr. works — Scavino and Hahn did not immediately respond to requests for comment. Robert Costello, an attorney for Giuliani, said he had not yet seen the suit and declined comment.

Vindman was fired from his White House job after Trump was acquitted at his first Senate trial on charges of abusing his power and obstructing Congress related to the Zelenskyy call. He retired from the military in 2020 after the Trump administration pressured military brass to block his promotion, the suit alleges.

His filing says how he was treated has had other repercussions.

“The actions taken by Defendants against Lt. Col. Vindman sent a message to other potential witnesses as well: cooperate and tell the truth at your own peril. The message reverberates to this day, as witnesses subpoenaed by Congress in connection with its investigation into the events of January 6, 2021, continue to heed former President Trump’s instructions to defy those subpoenas,” the suit says.

Vindman, who announced the filing of the suit in an op-ed in USA Today, said in a statement released by his lawyers that “I hope this lawsuit will shed more light on the abuses that are chipping away at our democracy and eventually bring a measure of justice to those who are responsible.”

Daniel Barnes reports for NBC News, based in Washington.