The Inspector-General of Police, Mohammed Adamu, has asked the suspended Acting Chairman of the Economic and Financial Crimes Commission (EFCC) Ibrahim Magu, to direct his bail application to the presidential panel.

Mr Oluwatosin Ojaomo, Magu’s legal representative, had asked the IGP to grant bail to his client on “self-recognisance” — after the suspended EFCC chief had spent four days in custody.

But in a letter dated July 14, 2020, and addressed to Mr Ojaomo, the IGP said the police force is not investigating and detaining Magu, so, it cannot grant the bail request.

It also advised the lawyer to redirect his request to the chairman of the presidential panel for appropriate attention.

The letter read in part: “The Inspector-General of Police directs that your attention be drawn to the fact that the Nigeria Police Force is not investigating CP Ibrahim Magu (your client), and he is accordingly, not being detained by the Police but by the Presidential Panel that is investigating the activities of the Economic and Financial Crimes Commission (EFCC).

“The Inspector-General of Police, therefore, advises that you reconsider directing your request to the Chairman of the Presidential Panel for appropriate attention.”

Mr Magu was invited by the panel headed by Ayo Salami, a retired President of the Appeal Court in the Presidential Villa in Abuja on July 6.

He was later moved to Area 10 Force Criminal Investigation Department (FCID) of the police in Abuja where he has since been detained.

On June 11, President Muhammadu Buhari affirmed the suspension of Mr Magu and it took effect immediately. 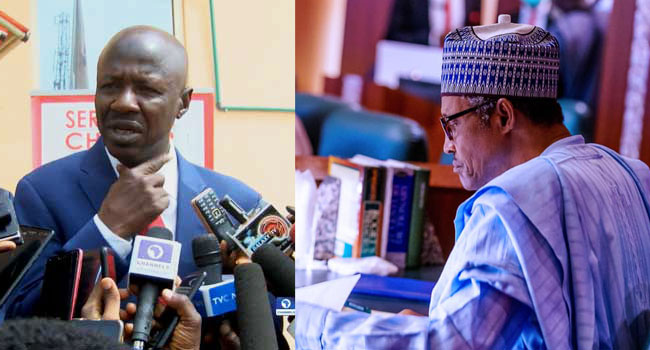 According to a statement from the office of the Attorney-General of the Federation and Minister of Justice, the presidential directive was to allow for an unhindered inquiry by the Presidential Investigation Panel under the Tribunals of Inquiry Act and other relevant laws.

The Presidency also said that those who see the investigation as a signal that the fight against corruption is failing, have failed to see the point.

In a statement, the Senior Special Assistant to the President, Media & Publicity, Garba Shehu, noted that there couldn’t be a better indication that the anti-graft fight is real and active, than the will to openly investigate anyone who has been charged to head such systems.

Meanwhile, the EFCC Director of Operations, Mohammed Umar, has been directed to oversee the activities of the commission.

Trump Leaves Washington: Says ‘We Will Be Back In Some Form”

Trump Leaves Washington: Says ‘We Will Be Back In Some Form”