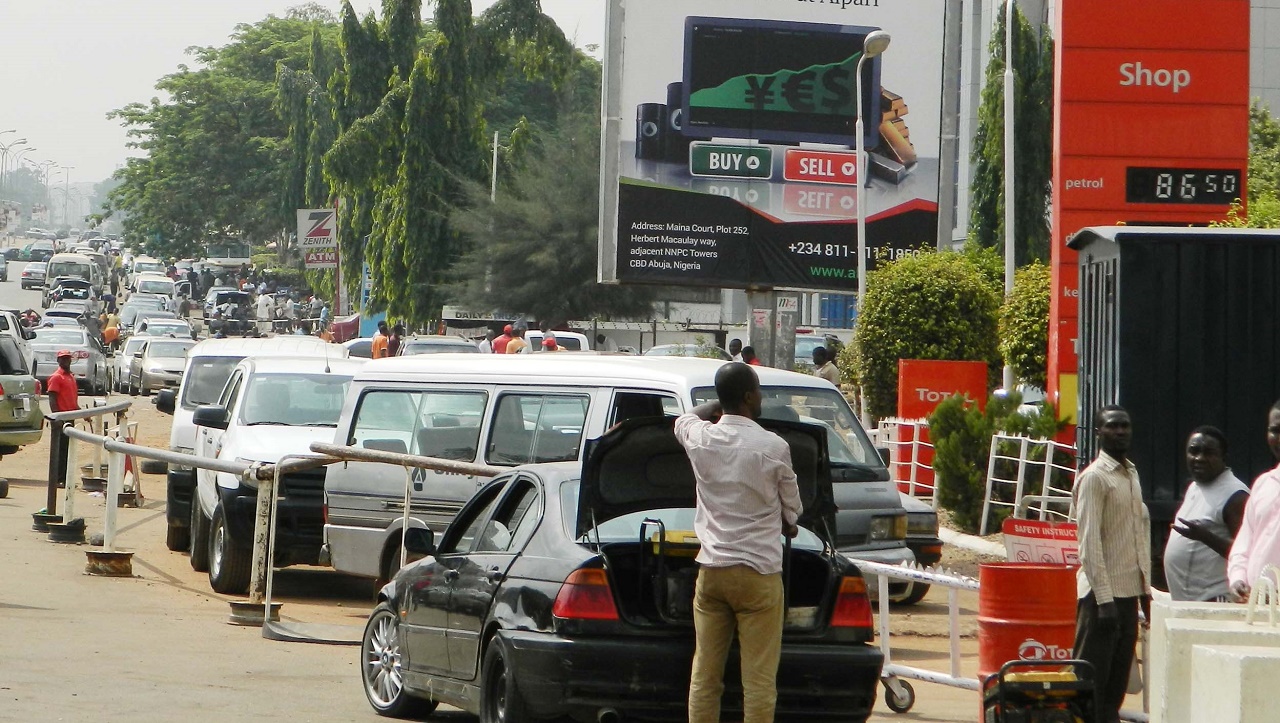 A long time ago in the late ‘90s, a teenage me sat beside my dad in his Benz 230 wagon, sweating it out on a long queue at a petrol filling station. There had been a price hike, and filling stations were hoarding their goods in anticipation of further hike. The one we were queueing at was the only one selling fuel in the entire city of Ado-Ekiti.

The day before had been no different. We’d queued at a different filling station for about seven hours until they decided they were no longer selling just when it was two cars away from our turn. We had been so deflated, going home quiet the entire distance, but for occasional hiss and sigh.

We rushed through Subuhi prayers that next morning, and even though the cover of darkness had hardly receded by the time we arrived at the station, there were already close to fifty cars waiting, each one kissing the bumper of the one before it, the queue snaking endlessly down the station’s side of the road.

The sun slowly made its way across the sky, brightening up the day. Hawkers swarmed the queue with their wares: drinks, bread, àkàrà, cigarettes, groundnut, newspapers. Some food sellers practically moved their shops within touching distance of the queue, obstructing traffic, the inviting aroma of their foods invading the noses of everyone around.

My mum had packed food and water for my dad and I. Whenever the hawkers sang their adverts past our car and saw the cooler of rice and stew with thick chicken laps protruding from it, they’d pause their singing, hiss, then resume, making sure their voices rang louder.

“What did we do? Why are they so upset?” I asked my dad as I began to munch on my plate of rice.

“It’s not us they’re upset with,” he said with a mouthful of chicken meat. “It’s the situation of the country they’re upset with. It’s only those who have money that can buy what they’re selling, and a lot of people here only brought money for petrol. Seeing that we already brought food, that’s one or two potential customers less and that can be annoying to the frustrated. Uncouth people don’t handle frustration well.”

It didn’t make much sense to me, but I nodded and continued to eat.

Many hours passed before the station began to sell. The sun had risen to the centre of the sky in scorching fierceness, and the metal barrier that served as the gate into the filling station was still a long distance off. The queue stretched in a single line until it got to the barrier, where it split into a delta of vehicles in no particular order. There were cars, minivans, minibuses, SUVs, buses, and a hoard of motorbikes, all vying to squeeze through the bottleneck of the entrance so they could get served petrol.

At first, my dad and I sought shade in front of the rows of shops that lined the roadside, rushing into the car to move it forward every time the queue snaked forward, then returning to the shade until the queue moved again. Soon, non-compliant drivers started to move along the queue, scavenging for empty spaces to shove their noses into. Dad decided we give up the shade and stay rooted in the car. He had one sweat-covered hand planted on the steering wheel while the other hovered between the ignition and the gear-stick. His legs stayed glued to the pedals.

There had been a light shower earlier in the morning, and the windscreen was covered in ugly patterns of rain-splattered dust. Through it and with sweat streaming down our faces, dad and I watched an irking spectacle unfold: a driver in the queue had been slow to react when the queue moved again. Apparently, his tank was already empty, so he could only push his car forward instead of driving it. A beatdown minivan with black polythene bags in place of glass windows had been lurking beside the queue. Sensing the situation, the driver spun his wheel into the space to claim it.

In seconds, a mild argument had turned into a melee, with other drivers descending on the minibus and collectively heaving it out of the queue, deaf to its driver’s pleas.

As I ran a finger over my forehead to wipe off beads of sweat, my dad said: “As hot as it is, you see why we have to stay in the car?”

I nodded, watching heat blisters form on my arms.

Relieved at how that one non-compliant driver was put in his place away from the queue, Dad relaxed his feet on the pedals and reached for a newspaper he bought from a hawker earlier in the morning. I strained my ears to hear Fela’s Suffering and Smiling playing faintly on the radio, wishing I had increased the volume before he picked the newspaper. A headline on the open spread he was reading: “Nigeria Named the Happiest Nation on Earth.” I read it aloud and punctuated with “really?”

My dad turned to look at me. His oily face shone as he swelled his cheeks into a smile before going back to reading his newspaper.

Time passed, and the sun turned a little kinder. My ears hurt from incessant horn blaring and my stomach turned from over-inhalation of food aroma and car-exhaust smoke. Dad and I already finished our big jug of water and had to buy a few sachets from the hawkers.

Even though vehicles still surrounded the entrance of the station, we were within touching distance now. The station manager had announced some minutes earlier that they were no longer selling for the time being. We were disappointed, but stayed put on the queue, same as every other vehicle.

Soon, a packed, rickety police pickup with wailing sirens zigzagged through the road in high speed, almost knocking a hawkers over. It veered to a stop behind the cluster of vehicles at the entrance of the station and the policemen jumped down, some wielding beaten rifles, others multi-strand whips. The began to order away the vehicles in their way, the van inching into the pockets of spaces they created. The manager was standing on the other side of the barrier, having talks with some of the policemen. When the van was close enough, he ordered his maiguard to pull the barrier open for it. Then a young man whose Toyota Landcruiser SUV was the only vehicle left between the van and the barrier came down yelling at the manager in a foreign accent. “If they go in, I gotta go in too! I ain’t gonna move this car if I ain’t going!” He wore a oversized tank top, baggy shorts, and basketball shoes. His neck and wrists gleamed with gold chains as he smacked the body of his SUV, ignoring a policeman who was trying to talk to him.

A couple of people attempted to intervene, but the young man stood his ground, much to the irritation of both the manager and the policemen. When the policemen had exhausted their patience, one ventured forward and dragged the young man by the belt, another raised a whip and crashed it into his face, and yet another cocked his gun and aimed it at the man who was by now on his knees with both arms raised.

“Where did you get this car?” screamed another.

“You must follow us to our station to come and state your source of livelihood!”

These words were accompanied with slaps, punches, and constant threats of gunshots. No one on the crowd that had formed around the policemen tried to stop them. From the distance where my dad and I stood, I could hear comments that suggested the man was perhaps too young for the car he was driving and could well be a thief or 419. Some even complained about his accent and mode of dressing.

After the policemen bought fuel and left in their van and the young man’s SUV (which they didn’t fuel), I looked up to my dad’s gloomy face with burning questions, knowing the young man’s car and dressing were things I aspired to through my hiphop idols, knowing it could have been me spraying that accent around proudly if I had it.

“Was he really a thief?” was all I could summon.

“Maybe, or maybe not,” my dad replied, taking my hand and leading me back to the car. “But it’s important you know that when you have, it’s best not to show off. These people could well have just been jealous that he seemed better off than them.”

A few metres away, some men had surrounded a small table under the shade of an almond tree. Two of them sat across from each other, a checkers board – carrying two colours of small, round plates that looked like bottle covers – balanced between them.

These were drivers from different vehicles behind us, including the minibus driver that was thrown out of the queue, enjoying the game, drinking from green and brown bottles, making merry. Someone had turned up the volume of his car stereo, filling the atmosphere with Fela’s Sorrow, Tears and Blood.

I turned to see that my dad had been watching me marvel at the men.

“That right there is why they think we’re happy,” he said. “Under same circumstances, other nations would revolt and demand for better, but in Nigeria, we always find ways to adjust and carry on… unfortunately.”

My head slowly moved up and down in sudden realization. That unlikely headline made sense now.

Today, many years after, fuel has just gone from N154 to N160, the second increase in just weeks. The fuel attendant flashes a smile like all is normal. At least, there’s no queue… yet. I return a much bigger smile. Never mind that the naira is having a depreciation dance of shame on the exchange market; income is on a downward slope while cost of living is going the other way; the ghost of foreign debt is growing bigger at the expense of our children; and policemen (SARS) are still on rampage, harassing and killing innocent youths.

It’s 2020, but allocations are still growing legs, and politicians (and top government officials) have run out of smart ideas to make us believe they’re not thieves. These days, they simply invest in neck guards, cheap arm-slings and lessons in theatrics; play the rave-of-the-moment ‘who can faint better’ game; threaten to ‘off mics’ when words become daggers; re-enact the age of Garden of Eden and blame the snake; or leave it to our uncourtly courts to save the day.

Despite everything, not much has changed for us, attitude-wise. We no longer hold that title, but despite everything, we’re still as happy as ever. Go on social media to see us goofing around like we’re guests at a lavish party.

Our case reminds me of the proverbial frog that sits in boiling water. It adjusts its body temperature to the growing heat and remains calm, until the temperature becomes too lethal, and it is too weak to jump out. The power to turn down the heat is in our hands, but well, we can also jump out to Canada, USA, UK, Australia and other climes where the grass seems greener. But for the rest of us still sitting in hot water, may it not become too lethal, and us too weak, before our delusional bubble of happiness bursts for us to realize that we could be boiling to death.

Filmmaker Ideh Chukwuma a.k.a OneSoul makes clarification on report of him...