Ian Wright is hoping Ben White has a transformative effect on Arsenal’s fortunes this coming season and believes the defender adds genuine pace at the back which David Luiz lacked.

Arsenal missed out on European qualification with an immensely disappointing eighth-placed finish in the Premier League last term and the north London outfit have invested heavily in three new arrivals already this summer.

Nuno Tavares, 21, and Albert Sambi Lokonga, 21, signed for Arsenal for a combined total of around £20million last month and Brighton star White followed the young duo through the doors at the Emirates in a deal worth £50m.

It’s the most money Arsenal have ever splashed out on a defender, with only Nicolas Pepe and Pierre-Emerick Aubameyang joining for higher fees in the club’s history. 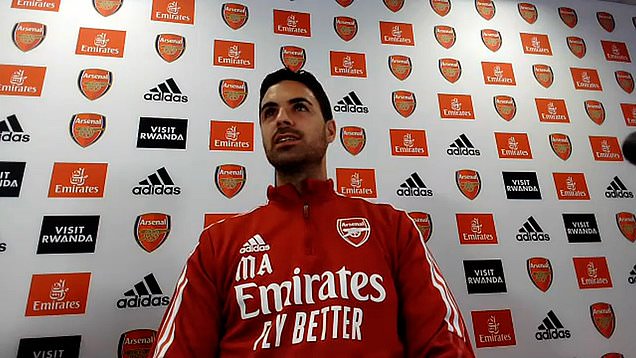 White could make his debut tomorrow night as Arsenal kick off their Premier League campaign away to newly-promoted Brentford and Mikel Arteta admitted he was ‘very excited’ about the Englishman’s potential at his pre-match press conference.

Like Arteta, Wright has been impressed with what he’s seen from White and is confident the centre-back’s speed and ability on the ball can bring about improvements in Arsenal’s defensive and offensive play.

‘I think they need to get up the pitch more, start winning the ball in an area where [Emile] Smith Rowe, [Bukayo] Saka, Pepe, who are going to need to have good seasons, can get the ball to Aubameyang, who should be playing down the centre,’ Wright said on Optus Sport on the eve of the new season.

‘I was watching his goals for Borussia Dortmund and literally every single one of them, he’s in the box or maybe he’s arriving in the box, but he’s in there with a lot of play getting in towards him.

‘The only change to the first-team really is Ben White so if teams are going to put pressure on them, on certain players, they will cause Arsenal problems because they’re straight into the back four.

‘Ben White brings pace which we didn’t have with David Luiz but he does also bring that diagonal ball, the progression of the ball to get into midfield.

‘Arsenal need to get themselves up the pitch more and start playing where they win the ball. With the pace of Ben White to recover, then they can start maybe getting into teams and really attacking.’

Wright feels Arsenal’s squad will have the perfect opportunity to prove they can deal with ‘intense pressure’ when they head to the Brentford Community Stadium.

‘What I love about this particular game is to play a team that’s come up, with that much confidence in the stadium – it’s only the sixth time they’ll have their fans there – and it’s going to be the kind of intense pressure that Arsenal players need,’ Wright added.

‘And it’s going to be up to Brentford to put that pressure on them because if they don’t, Arsenal do have the players to be able to get themselves through.

Granit Xhaka warns journalist after Switzerland’s World Cup exit: ‘If you ask a bad question, I’ll give you one’ | Football