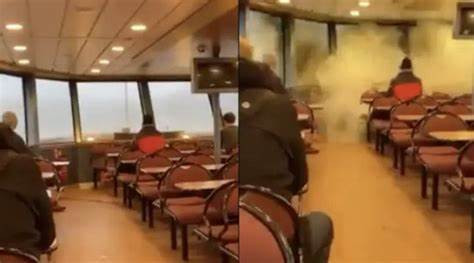 A footage which has gone viral online has shown moment a huge wave smashed through the window of a commuter ferry in Germany, causing people onboard to flee in apparent fear for their lives as water rushes onto the boat.

The ferry, operated by transport firm Hadag, was hit in the Tollerort terminal near Hamburg, amid a swell in the River Elbe as Storm Ylenia battered northern Germany with gale force winds.

The water entered the passenger compartment through the windows, which were shattered by the pressure of the wave. This caused a panic as people grabbed their things and made a run for it while water flooded the seating area.

A loud bang could be heard as the water crashed through the smashed window and submerges the floor where passengers are sitting down.

Though some passengers were knocked backwards by the force of the wave, no one was seriously injured.

Only a handful of people were on the ferry when the waves struck. Most of the passengers sat closer to the back, giving them enough time to flee.

Officials are now investigating why the windows gave way. Ferry services have also been temporarily suspended.

The incident happened as Storm Ylenia brought winds of 95mph to northern Germany. Residents have been told to stay indoors and keep a distance from buildings, scaffoldings and power lines.

Storm Ylenia has left thousands of homes without electricity, forced schools to close and caused travel disruption, with trains and flights cancelled in many parts of the country.

In Berlin, a state of emergency has been declared due to the huge volume of calls authorities are receiving.

Germany’s North Rhine-Westphalia state also closed schools as a precaution, and several other states said students could stay home if they wanted.