The Ben White transfer saga has finally come to a satisfactory end for all parties involved. Arsenal have the defender they want to kickstart Mikel Arteta’s rebuilding project, Brighton have secured an eye-watering £50million fee, while the player himself has joined the club of his choice.

Earlier this week, White returned from an extended holiday in Greece and Ibiza after being included in England’s Euro 2020 squad. He completed his medical at Arsenal’s London Colney training ground on Wednesday and Thursday before putting pen to paper on his deal with the Gunners.

Negotiations haven’t been straightforward between Arsenal and White’s current club Brighton as the Seagulls were keen to hold out for their valuation of a young Englishman with bags of potential.

Arsenal had two bids rebuffed before finally agreeing on a £50m fee that reportedly includes a sell-on clause for the Seagulls.

The deal was further complicated by White’s participation in Euro 2020, with all England players forced to remain in a team bubble for almost a month amid the COVID-19 pandemic.

But White always had his heart set on Arsenal ever since he first heard of their interest, despite interest from other Premier League clubs.

With White finally an Arsenal player, another of the club’s young centre backs has been sent out on loan. William Saliba joined the Gunners in 2019 and after spending the last two years on loan at French clubs Saint Etienne and Nice, has joined Marseille for this year.

Where can White play?

White is predominately a central defender who is comfortable playing in a back four or back five.

He played every game in Leeds’ Championship promotion campaign in 2019-20 alongside Scotland defender Liam Cooper in a back four, while missing only two games for Brighton, who play a back five, in his breakthrough Premier League season.

He also has the ability to play as a right back and a central midfielder should the need arise. He, himself, has a near flawless injury record, which bodes well for an Arsenal squad that rarely boasts a clean bill of health.

White’s ability with the ball at his feet as well as being able to carry out his defensive responsibilities with consummate ease means Arsenal are getting one of England’s brightest prospects.

The only potential flaw in White’s game is a weakness in the air. He has improved since getting stood up at the far post by Everton’s Dominic Calvert Lewin at Goodison Park last season, but it is certainly an area he will need to improve in, especially as Arsenal have already been exposed from set-pieces on several occasions during pre-season.

Who will partner Ben White in Arsenal’s defence?

The obvious answer is Gabriel Magalhaes, who should have benefited from a solid enough first season at the Emirates. The Brazilian started with a bang, winning two consecutive Player of the Month awards, but his form tailed off as Arsenal, briefly, sank to within touching distance around the turn of the year.

Still, the former Lille centre back is colossus in the air, witness his goal against Olympiacos in the Europa League as evidence, while he is also comfortable in possession and driving into midfield.

Another potential option would be fellow Englishman Rob Holding who started 30 times in the Premier League last season. However, the former Bolton centre-half is seen to also have a weakness in the air which could open up a defensive flaw if he and White were partnered together.

Arsenal also have Pablo Mari on their books, and the Spaniard could yet start the new season alongside Holding, given Gabriel’s injury which prevented him from competing in the Olympics, while Arteta is likely to give White time to bed in.

Calum Chambers, too, represents an option available to Arteta, but the 26-year-old is likely to compete with Hector Bellerin and Cedric Soares to become Arsenal’s first choice right-back this season.

What have the pundits said about the move?

While the majority of the reaction surrounding White’s move has been positive, eyebrows have been raised over the fee, although former England full-back Danny Mills has been so taken by the England international’s talent that he believes he’s undersold himself by moving to a club with no European football to look forward to. Here’s a selection of the best reaction…

Danny Mills: ‘The only thing I am surprised at is Ben White has gone to Arsenal. Let’s assume that he will be at Arsenal for two or three years at least before he goes somewhere else. I just think he is better than that. What is he going to win at Arsenal? League Cup, if he is lucky. Maybe the FA Cup.

‘I think he is an exceptional player and I think he is a fantastic signing for Arsenal. I am just a little bit surprised that Manchester United, who are looking for a centre-half, haven’t come in for him.’

Sol Campbell: ‘It needs to work out because Arsenal are not in the position to shift out £50m for a player. He’ll definitely have to start. He’ll have to hit the ground running. It’s a difficult one, it’s a lot of money. They’re looking at the years ahead and they see a future. He can play in midfield or as a full-back. At £50m, you’ve got to be the master of your position.’

Ray Parlour: ‘Brighton probably didn’t want to sell him and that is what they wanted £50 million. So Arsenal either had to say we right we will give you £50 million or you walk away and try and find someone else.

‘But in the end (they have gone right we are going to pay the £50 million) but when you look at the Varane deal for £41 million that is a World Cup winner and the experience he has that is an unbelievable deal for Man United.

‘White he is 23-years-old, he was excellent last season for Brighton, he has got that chance in the England squad and I am sure going forward I’m sure Gareth (Southgate) will be looking at him and thinking he has potential to get in that England side. Hopefully he can make Arsenal’s back four or back five a lot better if they decided to play a three at the back.’

Danny Murphy: ‘Ultimately, as a player, you can only make a decision based on the opportunity in front of you.. If I’m Ben White, I’m going to Arsenal, because they are the ones after me and it’s a step up, it’s a huge club.

‘Is it a progression in his career? Yes it is. It’s easy to look at last season and think Arsenal won’t be competitive. But they could get into the top-four next season. You can only move to a club that wants you. I agree that his quality and potential is really good and I’m surprised that Manchester United or Chelsea haven’t come in for him.’

How Arsenal could line up after the signing of Ben White

Arteta initially deployed a 3-4-3 formation upon succeeding Unai Emery and a move to a more defensive system yielded near immediate success.

It had been the Spaniard’s desire, however, to move to a more attack-minded 4-2-3-1 system at the start of last season and although Arsenal started the campaign with successive wins, their form quickly tailed off to the extent whereby there was a genuine possibility of a relegation fight being on the cards.

While Arsenal continued maintained a level of defensive consistency, even when results were poor, they struggled for goals last season and were well down the chance creation table.

Arteta struggled to find the right blend in central midfield, and although that is likely to be a problem again unless it is addressed in what remains of the transfer window, the lack of a ball playing centre-half represented another major issue.

David Luiz, when fit, filled that role but he became an increasingly infrequent presence towards the end of last season and was released at the start of June following the expiration of his contract.

Arsenal still, arguably, better suit a 3-4-3 formation given the personnel Arteta has at his disposal, but White’s signing gives an indication that he will at least begin the campaign with a flat back four at Brentford in just over a fortnight’s time. 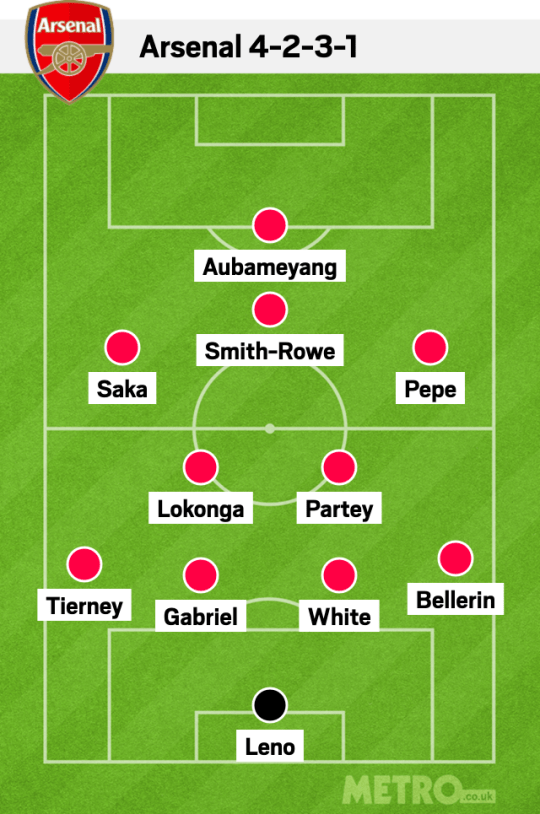 For more stories like this, check our sport page