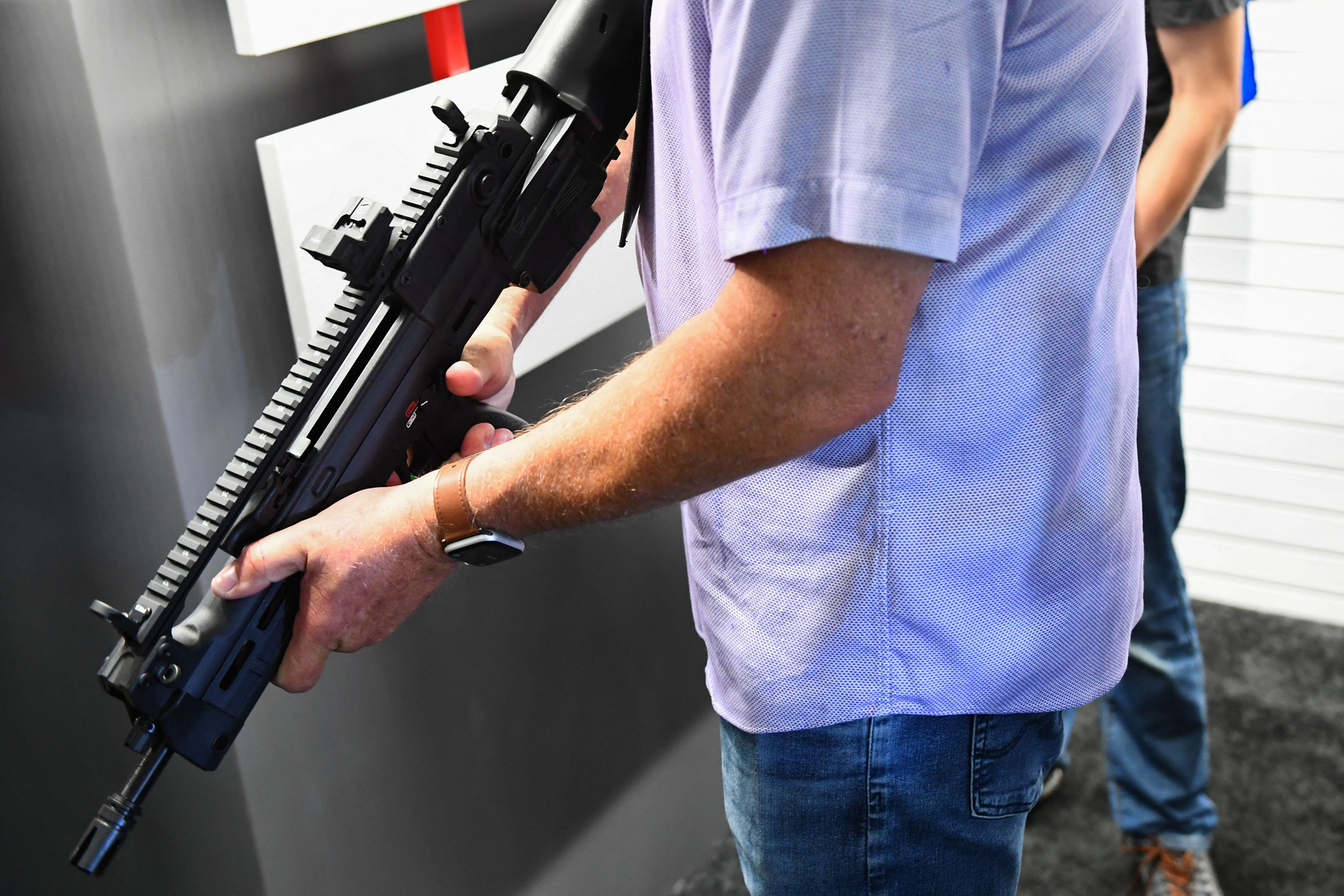 The package, called the Protecting Our Kids Act, includes new federal offenses for gun trafficking and straw purchases, and an increase in the legal age to purchase a semi-automatic rifle from 18 to 21 years old. It also includes incentives for states to pass red flag laws, which would allow authorities to confiscate guns from people deemed a risk to themselves or others.

Democrats are trying to harness momentum for changes to the nation’s gun laws following a string of mass shootings. Some moderate Republicans have expressed openness to some proposals, though most conservative lawmakers oppose the package.

The meeting is being held during Congress’ weeklong recess, with members back home in their districts participating virtually and others appearing in person.

Democrats spoke passionately about the need for Congress to finally take concrete action to prevent more gun violence. They took aim at Republicans who have blocked legislative action on the issue for years.

He also challenged Republicans who have repeatedly argued that Democrats are politicizing mass shootings to enact new policies. Emphasizing the urgency of the matter, Nadler noted the time that has passed since major mass shootings without substantive action by Congress — 23 years since Columbine, 15 years since Virginia Tech, seven years since Charleston, and four years since Parkland.

Rep. Madeleine Dean, D-Pa., said she was “stunned” by the comments made by her GOP colleagues. “Where is the outrage over the slaughter of 19 4th graders and their two teachers?” she said, raising her voice in frustration. “One of the children recounted how she took the blood of her dead friend lying near her and smeared herself with that blood to pretend to be dead.”

Rep. Eric Swalwell, D-Calif., questioned whether Republicans were there for the kids who were killed in last week’s shooting or for the gunman.

Republicans, meanwhile, claimed that the legislation would do nothing to prevent more mass shootings and repeated their argument that guns are not the issue that needs to be addressed. They said this effort by Democrats are part of a broader plan to dismantle the Second Amendment.

Jordan argued Democrats are only holding these votes to “appeal to Democratic primary voters.”

“What this bill does is it tells law-abiding citizens when you can get a gun, what kind of gun you can get, what accessories you can get for your gun and where and how you have to store it in your own darn home. That’s what this bill does. This is an assault,” Jordan said. “This is just the beginning. Their goal, plain and simple, is to get rid of the Second Amendment.”

Democrats have reiterated that their goal is not to take away Second Amendment protections.

During the markup, Rep. Steve Chabot, R-Ohio, offered an amendment to the package that would seek to “harden schools,” or expand resources for districts to hire more school safety officers by reaching out to retired police officers or former military service members.

Nadler and other Democrats, however, said that the GOP proposal was misguided and didn’t address the core issue of guns.

Rep. Matt Gaetz, R-Fla., whose state has faced numerous mass shootings in recent years such as the Pulse nightclub shooting and the Parkland school shooting, rejected the Democratic package.

“Maybe we ought to focus on the circumstances that cause these people to commit these shootings,” he said. “Maybe we ought to get rid of the gun-free zones that are causing this scourge of violence, and maybe we ought to really put the victims first not through virtue signaling, but through pensive thoughtful legislation.”

Rep. Tom Tiffany, R-Wis., said Democrats always have a “knee-jerk reaction to punish law-abiding citizens for the sins of the few.”

Despite GOP opposition, Speaker Nancy Pelosi, D-Calif., said at an event in San Francisco on Wednesday that the full House will vote on the legislative package next week. She also said Democrats plan to consider some version of an assault weapons ban.

Once the initial package advances, “we will be having a hearing and marking up the assault weapons ban following all of that,” she said.

Then-President Bill Clinton signed the first assault weapons ban into law in 1994 and it expired in 2004. Republican opposition has blocked Congress from re-enacting it.

Passing the initial set of bills in the Senate will be an uphill battle for Democrats, who would need at least 10 Republicans to join them to overcome a filibuster.

A bipartisan group of senators, however, has agreed on the outlines of gun violence prevention legislation. The negotiations began almost immediately after the mass shooting at the elementary school in Uvalde last week, in which 19 children and two teachers were killed.

Sen. Susan Collins, R-Maine, said Wednesday, “We are making rapid progress toward a common sense package that could garner support from both Republicans and Democrats.”