Holly Willoughby certainly pulled out all the fashion stops as she wore a very chic ensemble while on a lunch outing with her mum Linda.

The This Morning presenter donned a summery floral green dress with a brown trenchcoat as she left the swanky Ivy Chelsea Garden restaurant in London, where she and her mum had enjoyed afternoon tea together.

Holly amped up the accessories as she carried a giant white handbag, while she finished off her look with a set of brown sandals.

And of course, she made sure to keep safe amid the ongoing pandemic by wearing a black face mask as she made her way into a taxi.

The 40-year-old is certainly a fan of green, as she wore a polka-dot gown in that colour at Wimbledon last week with her presenting partner Phillip Schofield.

The duo was spotted with Holly’s husband Dan Baldwin as they attended the seventh day of the annual tennis tournament, and all appeared to be in great spirits.

They joined more than 15,000 spectators filling Centre Court stadium, attending a luncheon event before taking in the on-court action.

Just hours earlier, Holly and Phillip’s Scottish boss had a bit of an outburst on This Morning over England’s 4-0 win against Ukraine at the Euro 2020 tournament.

While the pair were basking in the aftermath of the victory, the show’s producer surprised them by appearing to swear in their earpieces.

Both Holly and Phillip appeared visibly shocked after hearing a message in their ears, although viewers couldn’t be sure what was said. 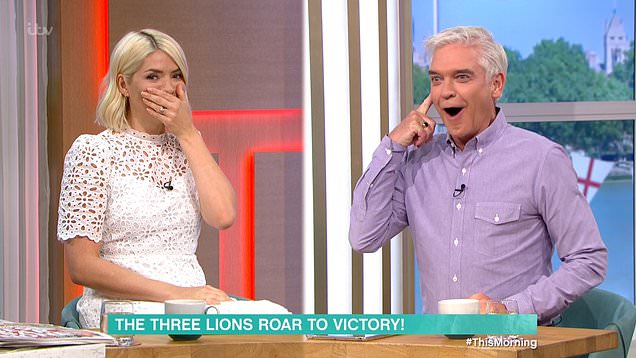 Phillip put his hand to his ear, while Holly gasped and covered her mouth.

‘Language!’ Phillip said, before Holly added: ‘Not at this time of the morning please!’

‘Oh my goodness, wow!’ Phillip then said, before Holly went on to say: ‘Sorry you lost your temper there.’

Thankfully, the interruption didn’t put the pair off celebrating and they went on to introduce highlights of the four goals.


MORE : Katie Price insists she’s not addicted to surgery as she reveals newest procedures: ‘I don’t want to look like a freak’