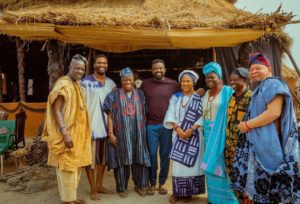 Following the successful release of “Swallow“, and “A Naija Christmas,” Kunle Afolayan has revealed his forthcoming Netflix project while also sharing some behind-the-scenes photos.

This 17/18th century Oyo empire epic is described by the filmmaker as a “game of thrones recreated in Nigeria but with a better representation of our culture.”

This may seem like mere hype but imagine a movie like the game of thrones recreated in Nigeria but with a better representation of our culture. If you are a true fan of productions born out of Golden Effects Pictures and KAP Motion Pictures, then your imaginations should be running wild. The movie is being shot on our latest project site KAP Film Village Studio and Resort Igbojaye, Komu in Itesiwaju Local Government, Oyo State.

This is the second of three Netflix films, according to a press statement on his Instagram page. He says we all “need to stay guarded because this one will stir up a hurricane that will blow off the roof.”

See the BTS photos below: