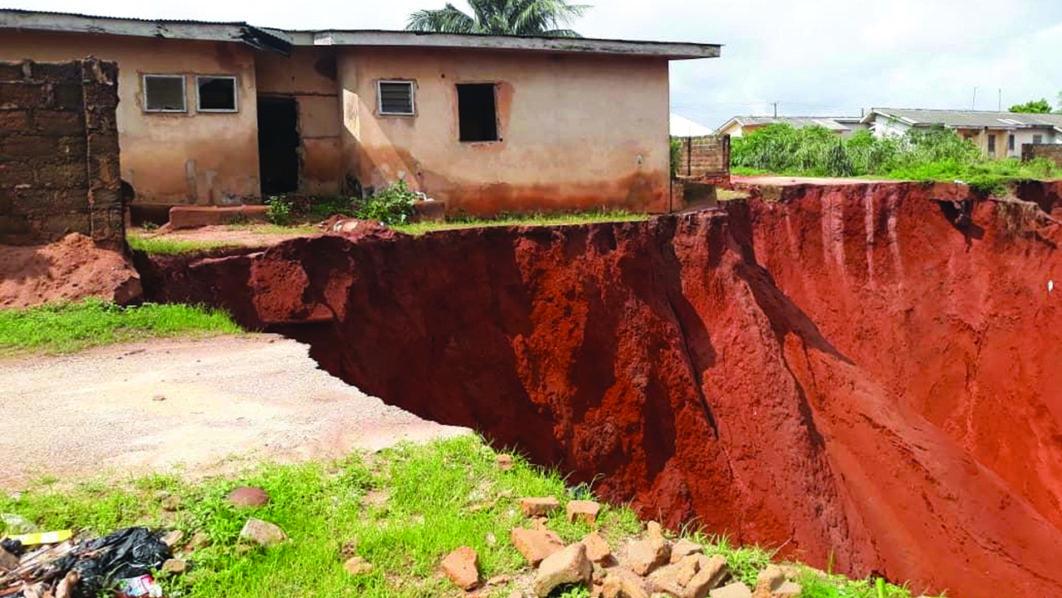 Also affected are staff and students of the University of Benin, UNIBEN, who reside in the affected communities. A visit to the area by NDV showed that the gully has already cut off the alternative route and crossed Border Bridge linking Ugbowo to Ikpoba River.

Some other areas affected include the area housing the Senior Staff Club and Senior Staff Quarters of the university.

The rampaging gully erosion also halted the ongoing construction of the Ekosodin road that links the area to the New Lagos-Benin expressway.    A signpost indicated the Niger- Delta Development Commission, NDDC had apparently awarded the contract in the past.

Secretary-General of Efosa community, Comrade Aghahowa Obayinwana, pleaded with relevant authorities to intervene and put an end to the innumerable damages the gullies have done to them.

“Delay is dangerous and in a situation like this where over five communities have been crippled and means of livelihood taken, crime becomes inevitable.”

A lecturer at the Faculty of Management Science, University of Benin, Dr Uwagbor Eboigbe, said the situation could aggravate if not checked, adding: “As we speak, this gully- the ravaged road has among other damages, rendered many staff homeless and the Staff Club where we ease off after a tensed working day is overfilled. You can see from the signpost that this project has been awarded at different intervals.”

“On our own, we have made informal appeals to relevant authorities at Abuja and Benin, yet nothing is working. I am now appealing on this ground for aggressive positive measures to be taken because it will be one fall too many should UNIBEN go down.

“If the fund needed is too much for one agency to foot, they should employ a syndicated approach and collectively get it done because if the situation is not given an aggressive response, UNIBEN may go down within the next six months and the consequences would be too enormous,” he said.

A concerned student, Ewainse-etin Musa, said: “Government should not waste any more time, thanks no life has been lost. I am particularly appealing to the current Minister of Works and Housing, Babatunde Fashola, who is also a product of this institution not to let this calamity befall us in his time as a father because this is already a death trap.

“If in two months nothing is done to check this, we may be forced to come out massively and halt school activities. We will make this death den the only usable route for all instead of Ugbowo-Lagos-Benin expressway until this road is done,” he added.