Governor Samuel Ortom of Benue State has bagged an Award of Excellence from the Petroleum and Natural Gas Senior Staff Association of Nigeria, PENGASSAN, Department of Petroleum Resource, DPR.

PENGASSAN, DPR branch, had at their award night which took place Thursday, 14th October, 2021 at the Congress Hall, Transcorp Hilton Hotel, Abuja to mark the association’s sixth Triennial delegates conference honoured Governor Ortom for his contribution to the growth of the Nigerian economy.

Represented by his Principal Special Assistant on Media and Acting Chief Press Secretary, Mr. Nathaniel Ikyur, the Governor dedicated the award to Benue People, saying they deserve the accolades for giving him the mandate to serve them for two terms and standing with him through difficult moments. 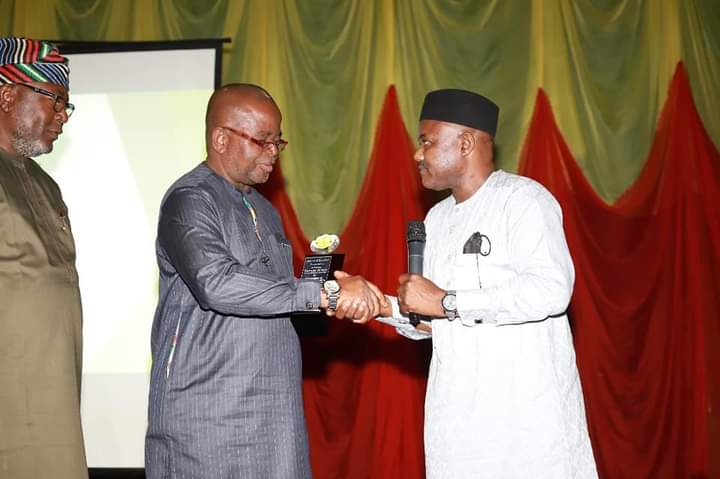 According to the Governor, “Without the people of Benue State who gave me this mandate to serve, this award won’t come to me. But I dedicate this award specifically to them. To the Benue people being killed and displaced from their ancestral lands by the herdsmen.This award is to them.”

Governor Ortom assured the people that his administration would continue to deliver quality services to them as well as speak out against injustice in the country until the right thing is done.

Earlier, the chairman of PENGASSAN, DPR branch, Mr. Owan Abua said Governor Samuel Ortom and his Gombe State counterpart, Muhammad Inuwa Yahaya and several others were considered for the awards following their contributions to the growth of Nigeria.

The Governor’s representative was also on hand to handover awards to deserving staff of PENGASSAN on behalf of the Governor.