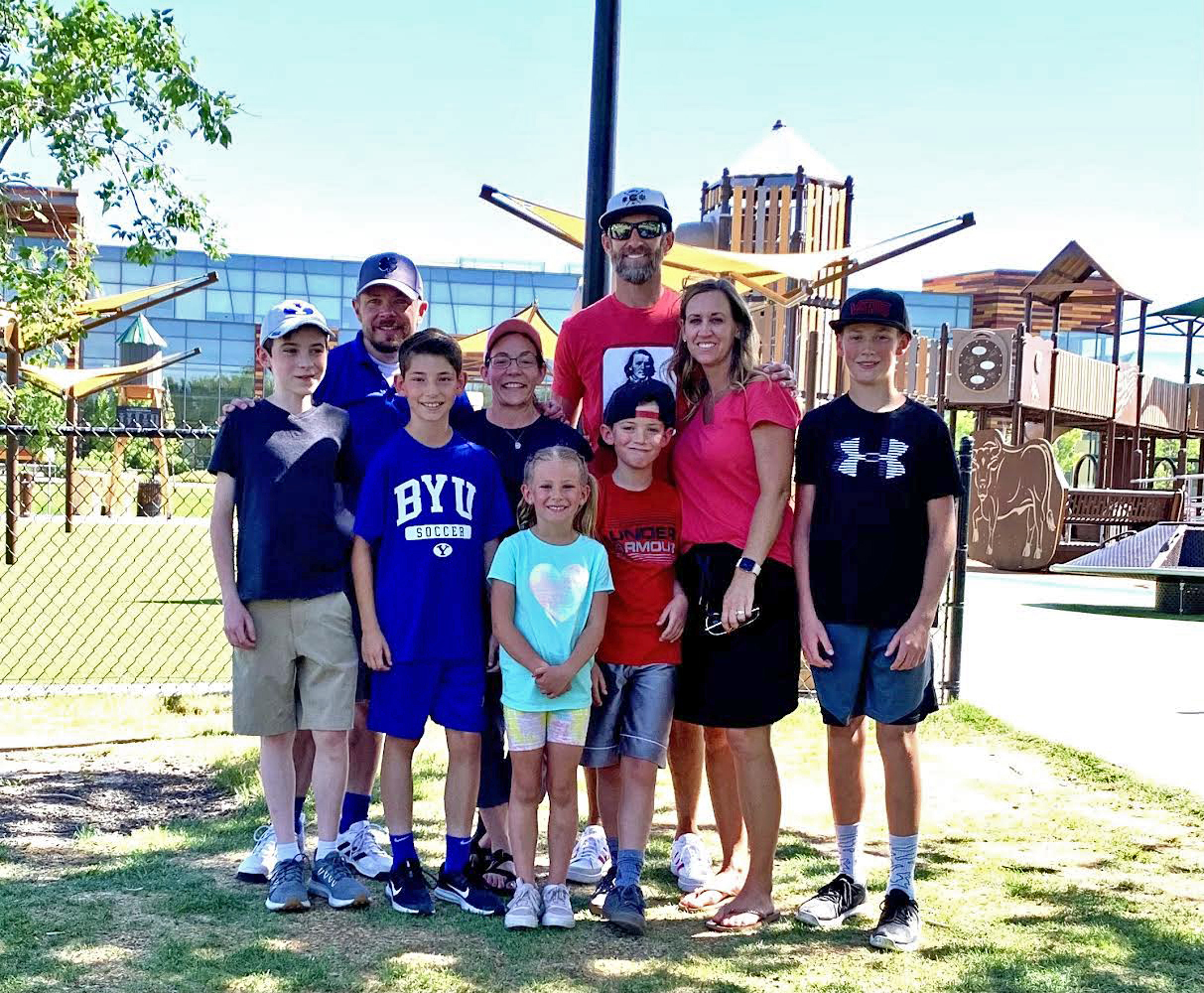 Vanner Johnson’s wife, Donna, had purchased the take-home genetic testing kit 23andMe for fun. But when her husband received his family’s 23andMe results in August 2019, he noticed something odd. His 11-year-old son, Tim, wasn’t listed as his biological relative. The couple soon learned that the hospital where Donna had undergone in vitro fertilization (IVF) 12 years earlier had likely mixed up the sperm samples. Vanner wasn’t Tim’s biological dad.

“There were so many questions with no answers,” said Donna. “We had no idea who our son’s biological father was.” When the Johnsons finally tracked down Tim’s biological dad early last year, using a second DNA test and some strategic Googling, they learned he had been another patient at the fertility clinic.

“It was actually almost comforting when we discovered it was another patient, it was like, ‘at least it wasn’t the doctor,’” Donna explained.

The Johnsons’ story is one of many paternity secrets that have come to light in recent years as the popularity of take-home genetic tests has exploded. In September and October 2021, 23andMe’s website sales shot up more than 47 percent, according to data from the analytics firm Bloomberg Second Measure. Some fertility lawyers said that they tended to see more of these cases after family members gave these tests as holiday gifts.

“I have seen a substantial increase in these cases over the past few years,” said Adam B. Wolf, an attorney specializing in fertility fraud lawsuits. “Our clients typically call in February, after receiving the results of the at-home DNA tests they receive for the holidays.”

In 2020, Beverly Willhelm, one of Wolf’s clients, filed a lawsuit against her fertility doctor Phillip M. Milgram after she discovered that he’d used his own sperm to impregnate her, rather than the sperm of an ano

Like Vanner Johnson, Willhelm realized what had happened after her son took a 23andMe test. “Plaintiff’s son is the result of Defendant’s medical rape of Plaintiff,” the complaint reads. “Plaintiff is shocked and devastated by Defendant’s abuse of his power to violate her trust.”

Milgram’s lawyer, Curtis Greer, did not respond to a phone and email request for comment. But the case is scheduled for jury trial April 29.

Most of the paternity discoveries that have made headlines in recent years follow a similar pattern. “We’ve represented roughly two dozen women who went to their fertility doctor expecting to get sperm from someone they knew or an anonymous donor, only to learn later, either through 23andMe or Ancestry.com, that the doctor took the liberty of inserting his own sperm into his unsuspecting female patients without authorization or consent,” said Wolf. “It’s a serious invasion of bodily autonomy.”

In a statement, 23andMe communications director Andy Kill said, “With genetic testing readily available to consumers, we are increasingly hearing stories of families discovering and reuniting with newfound relatives, and of customers finding unexpected results in their reports. Although 23andMe was not designed specifically to help people confirm parentage or find biological parents, our DNA Relatives tool does help people find and connect with participating genetic relatives. This feature is completely optional, meaning customers must actively choose to participate and are informed up front that by using the tool, they may discover unexpected relationships.”

The company also said its customer care team is specifically trained to help customers who learn about unexpected family members through using the service.

In 2020, Tim Johnson did a second DNA test, this time through Ancestry.com. Through that test, he ultimately connected with Devin McNeil, a father of three living in Colorado, and called him. “We may have something in common through IVF,” he told Devin. Vanner asked if McNeil and his wife, Kelly, had undergone IVF through the University of Utah Center for Reproductive Medicine. He said yes. The couples realized they’d likely been at the clinic on the same day in 2007.

“Every piece of information just unfolded really without question, the timing, the testing,” Devin said. “So it wasn’t very long before it was hard to not believe it.”

The University of Utah Center for Reproductive Medicine did not respond to a request for comment from NBC News.

Now the McNeils faced a similar quandary: what to tell their kids, ages 13, 8 and 6. Like the Johnsons, they opted for honesty. “We had to explain to our younger kids, sometimes mom and dad need help having babies and they do that outside of the body,” Kelly said. “And we kind of explained IVF in layman’s terms. And that there was a mistake made in the lab, and a baby was made with another woman’s eggs.”

The McNeils did a DNA test to confirm that their son who was conceived through IVF was biologically related to Devin. He was. The mix-up, it seemed, had only happened on one side. The McNeils’ children were all biologically their children.

Even in cases where the donor is truly anonymous and unknown to the woman getting pregnant, DNA kits can raise thorny ethical questions. Nara Milanich, a history professor at Barnard College who wrote Paternity: The Elusive Quest for the Father, said the ease of discovering one’s paternity could deter people from donating sperm.

“The commercialization of this technology has blown open these questions around the ethics of finding out paternity,” she said. “I’m not going to come down and say whether people should have an unfettered right to DNA knowledge or not. But I will say we haven’t had a public conversation that grapples with those questions. You can buy these tests anywhere and give them as Christmas presents, and that’s likely not going to change.”

The United States has been quick to embrace this new technology but slow to address the privacy issues behind it, Milanich added. That’s partly because take-home testing kits aren’t subject to the same regulations as medical tests, according to Wired. As such, they don’t have to comply with the Health Insurance Portability and Accountability Act (HIPAA), which would require them to keep their customer’s genetic data private. According to the Food and Drug Administration website, the agency does not regulate tests for “non-medical, general wellness, or low risk medical purposes.” While the FDA does not warn consumers about the potential for error in these tests, it advises consumers to “use their judgment when ordering and interpreting their results from these tests” because genetic testing companies may produce varied results.

“In France, DNA testing is strictly limited. You’re only supposed to test DNA with a judge’s order,” Milanich said.

Things might be starting to change here. In October, California Gov. Gavin Newsom signed the Genetic Information Privacy Act, which requires direct-to-consumer DNA testing companies to give consumers information about how their data will be collected and used. Both Utah and Arizona passed similar laws earlier this year. They won’t change how easily people can have access to DNA data, but they could curb how DNA testing companies like 23andMe can use the data.

Alex Stack, a spokesperson for Newsom, referred NBC News to the California Department of Health, which said in a statement that the legislation would allow consumers to revoke their consent regarding the use of their genetic information, and force companies to destroy the consumer’s biological sample within 30 days of receiving this request. The statement noted that the law is intended to allow consumers to “control their genetic data without fear of third parties exploiting it.”

In June, the Johnson and McNeil families decided to meet in person, at a park in Utah. Tim sent Devin a list of questions ahead of time: “How tall were you when you finished ninth grade? Were your baby teeth weak? Do you have an innie or an outie belly button?”

Devin joked that he’d been worried about the questions ahead of the meeting but quickly realized he “didn’t have to study.”

“Tim was most excited, I think, about learning that Devin was 6 feet three, because I’m 5 feet eight, and we knew there’s no way he’s going to get any height from me,” Vanner said. “So now he’s got hope.”

While 23andMe includes a warning label on its results regarding DNA Relatives (“By participating in DNA Relatives, you might discover unexpected relationships. Though not common, these discoveries could affect you and your family.”) Donna Johnson said she never anticipated the results. “We were in a monogamous relationship. There was no question. So we went into it very naively,” she said.

Both families are preparing to file lawsuits against the University of Utah Center for Reproductive Medicine.

In the meantime, they’re encouraging everyone who’s gone through IVF to get a DNA test. That is, if they’re prepared for the results.