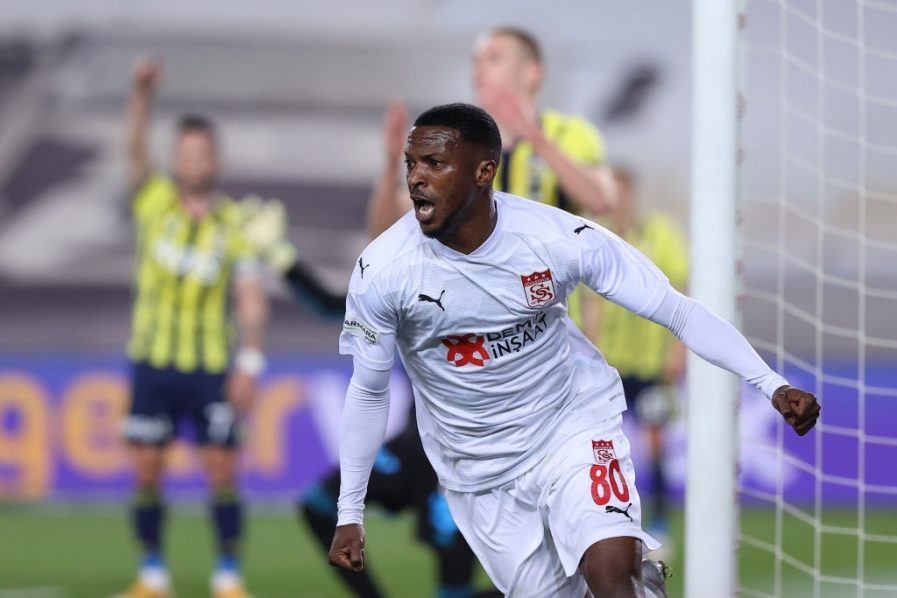 Olarenwaju Kayode of Demir Grup Sivasspor celebrates after scoring a goal in the Turkish Super Lig. Photo by AFP

Dora Kayode, wife of Nigerian international, Olanrewaju Kayode, who is plying his trade with Sivasspor of Turkey, has hailed her husband for registering a goal for his side at the weekend in the Turkish Super Lig.

The striker opened his goal account in the Turkish Super Lig this season after scoring in Sivasspor’s 4-0 home win against Fatih Karagumruk, the team of Super Eagles captain, Ahmed Musa, on Saturday.

Kayode scored for Sivasspor in the opening minute of the game. And Dora Kayode, a lawyer, who also doubles as her husband’s football agent, is confident that the in-form Kayode will deliver more goals for the Turkish side in the on-going season.

A trained lawyer, Dora Kayode has always been a staunch believer in her husband’s ability to do well in Turkey since the Super Lig kicked off and has no doubt that Kayode, who has been capped four times for the Super Eagles, and who is among a select few to have featured for Nigeria at all age-grade levels, as well as the Olympic team and the senior national team, would have a great season with Sivasspor.

“I watched the crucial encounter and you can’t believe that since the blast of the whistle in the game, I had this belief that Kayode would register his name on the score sheet that day, and thank goodness, the goal came in so early. Don’t forget that I said it before this time that my husband would take Sivasspor to places this season,” said Dora Kayode, who has been a rock-solid pillar for the Nigerian international.

“Let me sound it clear once again that Kayode is just beginning. Expect many more goals from my husband as the season progresses. This I am sure that he would deliver,” she added.

The 28-year-old Kayode is on loan at Sivasspor from Ukraine’s Shakhtar Donetsk, and scored twice in the qualifying rounds of the UEFA Europa Conference League.

He made eight appearances in the Europa Conference League and has appeared in six of his side’s eight Turkish Super Lig games this season.