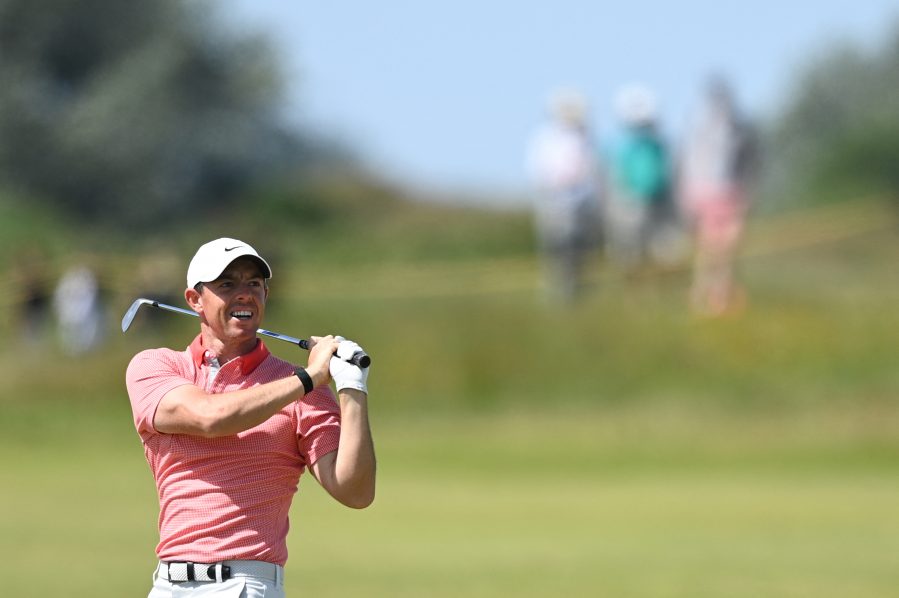 Northern Ireland’s Rory McIlroy plays his second shot on the 15th hole during his third round on day 3 of The 149th British Open Golf Championship at Royal St George’s, Sandwich in south-east England on July 17, 2021. (Photo by Glyn KIRK / AFP)

The Tokyo Olympics golf tournament begins Thursday with a field of 60 men teeing off at Kasumigaseki Country Club near Saitama.

Despite the Covid-enforced late withdrawals of the last two US Open champions, Bryson DeChambeau, and world number one Jon Rahm, the line-up remains studded with major winners who will battle over four rounds to succeed 2016 gold medallist Justin Rose.

Collin Morikawa (USA)
The newly crowned “Champion Golfer of the Year” at the British Open has shown time and again in his short career that he has the game and the temperament to handle pressure on the biggest stages in golf.

It’s hard to believe that he only turned pro 25 months ago, but such has the 24-year-old’s impact been on the sport that he has more tournament wins (five) than missed cuts (four), with two of his titles being majors and won a World Golf Championships event.

No one will be surprised if the world number three can turn the silver Claret Jug he won at Royal St George’s less than two weeks ago into Olympic gold — and having half-Japanese heritage, it would be a result that would go down a storm in Tokyo.

Hideki Matsuyama (JPN)
The pressure is on for Masters champion Matsuyama to secure gold for the golf-mad Japanese nation at his home Games.

He will have the advantage of playing on a course he knows as well as any. As an amateur, he played and won at Kasumigaseki Country Club in the annual Japan Junior Championship.

He also took the first of his two Asia-Pacific Amateur Championships there, which led to his maiden appearance in the Masters at Augusta National in 2011 where he claimed the Silver Cup for leading amateur, finishing tied 27th.

He missed the recent British Open because of Covid, but his aim this week is simple.

“Go there and win a gold medal,” he said. “That’s my goal and I’ll do my best to accomplish it.”

Rory McIlroy (IRL)
McIlroy last won majors with back-to-back triumphs at the British Open and PGA Championship in 2014 and he could ease those seven years of hurt by picking up an Olympic gold.

The Northern Irishman pulled out of Rio four years ago because of the Zika virus, a decision he later regretted when Ryder Cup teammates Justin Rose and Henrik Stenson won gold and silver.

He enjoys playing in Asia, coming third in the Zozo Championship in Japan behind Tiger Woods and winning the WGC-HSBC Champions a week later in China on his last visit to the continent in 2019.

He moved back to number one in the world soon after but has struggled since the post-Covid resumption last year, dropping to 15th in the rankings and turning to renowned swing coach Pete Cowen for help.

Viktor Hovland (NOR)
In his first full season as a pro in 2020, the 23-year-old became the first Norwegian to win a US PGA Tour event and it would surprise no one if he could register Norway’s second gold of these Games after Kristian Blummenfelt in Monday’s triathlon.

The 2018 US Amateur champion became the first from his country to win on the European Tour at June’s BMW International in Germany and comes to Tokyo 2020 in form, having finished tied 12th in the British Open behind Morikawa.

Ranked a career-high 11th in the world, Hovland is a member of the outstanding so-called college “Class of 2019” which includes Morikawa.

He became the first player since Rio 2016 bronze medallist Matt Kuchar in 1998 to be low amateur at the US Masters and the US Open in the same season in 2019.

He burst onto the professional scene with five top 25s in his first 10 starts as he embarked on a remarkable streak of shooting a record 18 consecutive rounds in the 60s.

Justin Thomas (USA)
The world number four has a remarkable record of success when playing in Asia, having twice won both the CIMB Classic in Malaysia and the CJ Cup in South Korea.

The 2017 US PGA Champion won the Players Championship in March, and although he was disappointed with his showing in the British Open, where he finished tied 40th, Thomas showed glimpses of his best when recording a top 10 the week before in the Scottish Open.

Playing for his country brings out the best in Thomas, and he was outstanding for Team USA in a losing cause at the last Ryder Cup in France.

“Those 3 letters ‘USA’ means a lot to me,” Thomas tweeted at the weekend before leaving for Japan.

“So lucky, honored, and privileged to get the chance to represent and play for my country. The reality is setting in. @olympics are next week!!!! Let’s go @teamusa”