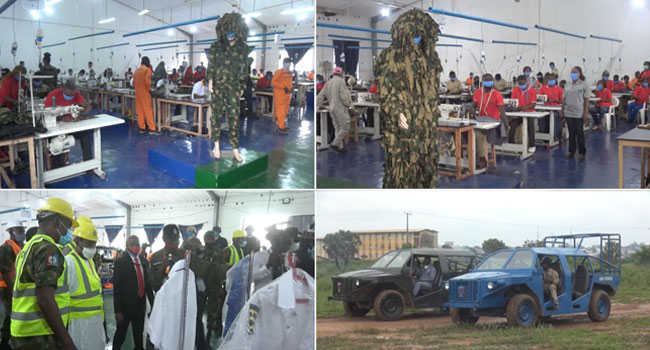 The Defence Industries Corporation of Nigeria (DICON) says light tactical vehicles and other weapons being locally produced by its company, will help in addressing Nigeria’s internal security challenges especially in the fight against Boko Haram insurgents in the northeast and bandits in the northwest and other parts of the country.

The Director-General of the Corporation, Major General Victor Ezugwu made the disclosure when the Minister of Defense toured production lines of the company located at Kakuri industrial area in Kaduna South local government area of Kaduna state.

He says that in line with the presidents directive in the implementation of Executive Order 5 on local content, DICON has produced some locally made military equipment including the Ezugwu Mine Resistant Ambush Protected Vehicles (MRAP), minesweepers, as well as other armoured and soft-skin vehicles and ammunitions, that have been deployed in various theaters of operations across the country.

On his part, the Minister of Defense, says that with the dynamics of the society and the present nature of warfare, the federal government will strengthen DICON to become the country’s center of armament, rather than relying heavily on foreign countries for military equipment and logistics.