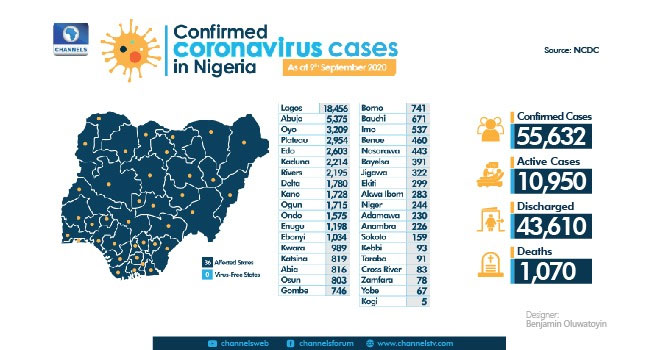 The Federal Capital Territory (FCT) has topped the list of daily COVID-19 fresh cases with 40 new infections recorded in the last 24 hours.

Following the 176 fresh cases released by the Nigeria Centre for Disease Control (NCDC) on Wednesday night, the total confirmed cases has risen to 55,632.

Giving a breakdown of the figures, the health agency said Lagos came second with 34 cases followed by Plateau with 26 cases.

On a positive note, the country has been able to manage 43,610 people who have recovered from the virus just as 1,070 people have unfortunately died from the disease.

The global toll from the coronavirus pandemic has topped 900,000 deaths since it first appeared in China late last year, according to an AFP tally late Wednesday.

Latin American and the Caribbean are the worst-hit region, accounting for 300,340 deaths, followed by Europe with 219,616 fatalities, according to the AFP tally based on official statistics.