The President threatened to deal with those bent on destroying Nigeria through insurrection.

In a post on Twitter, the president wrote, “Many of those misbehaving today are too young to be aware of the destruction and loss of lives that occurred during the Nigerian Civil War. Those of us in the fields for 30 months, who went through the war, will treat them in the language they understand.”

However, the social media platform deleted the message on Wednesday, following widespread condemnation of the tweet.

Nigeria’s Minister of Information and Culture, Lai Mohammed, announced the suspension in a statement signed by his media aide Segun Adeyemi.

The minister cited the persistent use of the platform for activities that are capable of undermining Nigeria’s corporate existence.

The action has faced worldwide criticism, and Twitter said it was working to bypass the restriction and restore access to Nigerians.

Reacting, Trump described the ban as a victory for the people of Nigeria and a needed check on the excesses of social media giants.

The former president who has had a long-running battle with social media companies also said he wished he had taken a similar measure when he was banned from Twitter in January.

“Congratulations to the country of Nigeria, who just banned Twitter because they banned their President,” Trump said in a statement issued Tuesday night.

He called on other world leaders to take stringent aims at Facebook, Twitter and other big tech players and warned that their reign would soon be over as other competitors would emerge. 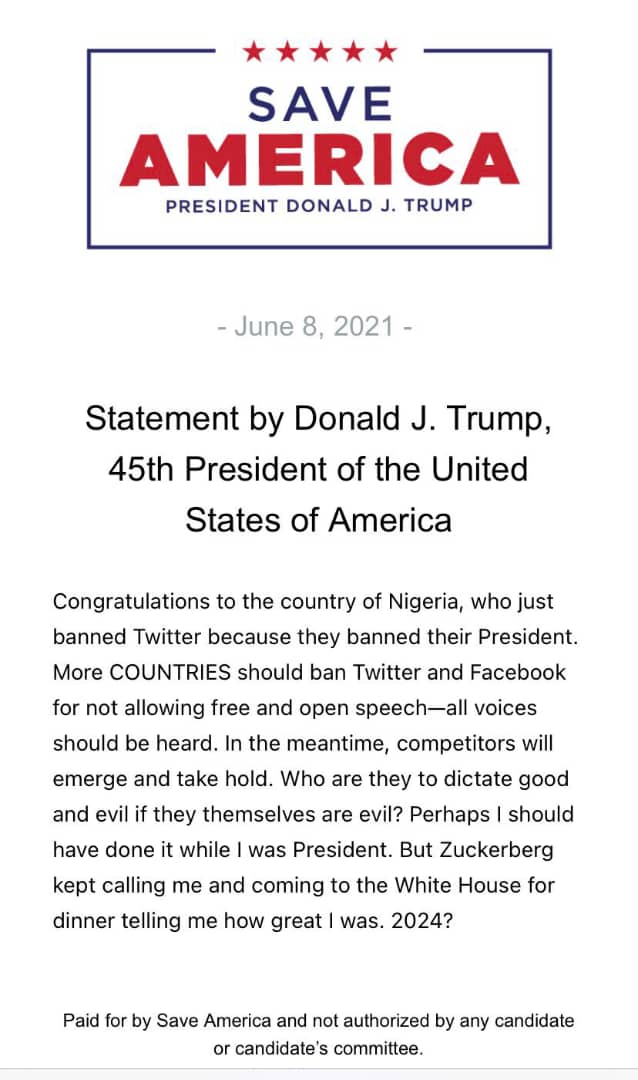