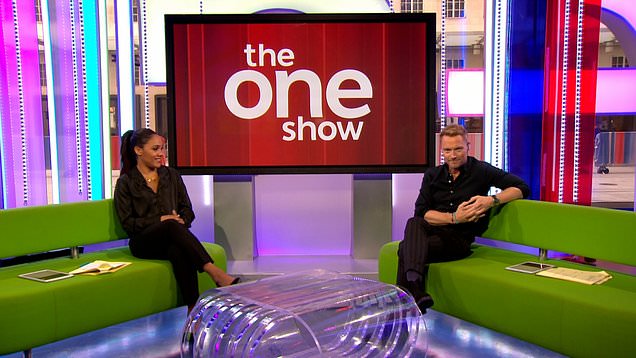 Alex Scott spilled the beans on her conversations with David Beckham as they watched England’s semi-final win over Denmark in last night’s Euro 2020 tie.

The football legends were seated next to each other at Wembley Stadium for the tense game, which saw the national team set up a final against Italy, on Sunday.

Appearing on the One Show, the Strictly Come Dancing star lifted the lid on what they discussed while watching the action unfold.

‘I don’t know, I think I got the wrong ticket,’ she said as co-host Ronan Keating asked about their evening.

‘On that moment they [Denmark] scored the free-kick, I turned to David and I said, “what do you reckon?”

‘And he’s like, “Well personally I would’ve put it more in the corner!”’

James Corden, Sir Mick Jagger and Piers Morgan were also in the stands for the match while many, many more tuned in from home.

In fact, England v Denmark has become the most-watched TV event in nearly a decade, since the 2012 Olympics.

It has now been confirmed that the game attracted by a peak of 27.6million viewers, across ITV, ITV Hub and STV.

ITV boasted an audience share of 89.3% last night, and it was the most-watched tie of the entire tournament so far.

Well, it is coming home.

The One Show continues on weeknights, at 7pm, on BBC One.


MORE : Loki episode 5: From Thanos Copter to Frog Thor, did you spot all the Easter Eggs?