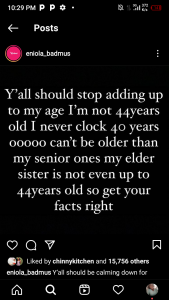 The actress who turned a year old on Tuesday, September 7, has taken to her Instagram handle to make a post saying she is not as old as people make her to be and they should stop falsifying her age.

She declared that unlike what most people were saying about her she was not 44 and  was not even 40 yet.

Newspot recalls that Badmus had received a cash gift of five million naira from her colleague Jennifer Akindele on her birthday,  she had being quite excited at the gift and said that she was not expecting it.