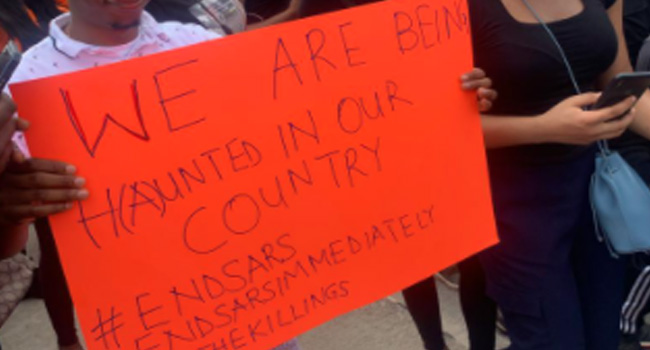 From Festac, Ikoyi, Ikorodu, to Lekki, the demand was the same – #EndSARS! #EndSARS!! #EndSARS!!! – as  Lagosians continued the #EndSARS protests, calling for the scrapping of the Special Anti-Robbery Squad (SARS).

On Saturday, the protests spiralled into various cities in Nigeria with agitators carrying placards saying, “We are being haunted in our country #EndSARS, #EndSarsImmediately.”

The protesters took their agitations to various locations in the country and had in Lagos, kept vigil at the State House of Assembly for multiple nights to press home their demands.

In Abuja, the #EndSARS protesters were at the Nigeria Police Force headquarters, demanding to speak with the Inspector General, Mohammed Adamu.

The protests, however, took a different dimension as a young man identified as Jimoh Isiaq was shot in Ogbomosho, Oyo State on Saturday.

“I have received with deep sadness the news of the passing of one of our children, Jimoh Isiaka, who was shot during the ENDSARS protest in Ogbomoso,” Governor Seyi Makinde said on Saturday. “He later died at Bowen University Teaching Hospital, Ogbomoso, earlier today.”

The protests equally extended to other parts of the nation, including Bayelsa State, Anambra, Ogun State, Abuja, Delta, Kaduna and other parts of Nigeria.

In recent times, the activities of the police unit have come under scrutiny and several members of the squad have been found guilty of using their position of authority to trample on the rights of citizens, especially the youths.

The youths are decrying the constant harassment in the hands of SARS operatives, lamenting the rate at which many young creatives are being battered and killed by the ‘ruthless’ police officers in the squad.

The protest has drawn attention from both Nigerian and international celebrities including Trey Songz, Cardi B, Chance The Rapper, Big Sean, John Boyega amongst others.

Following the outrage that the protest generated, President Muhammadu Buhari has asked the Inspector General of Police Mohammed Adamu to address the concerns of Nigerians.