#EndSARS protesters on Friday morning regrouped at the Lagos State seat of power in Alausa where they have been converging for more than 10 days now.

The protest coordinators have made arrangements for food and water as music plays in the background to prepare the protesters for the day ahead.

They also have medical personnel on standby, ambulances, mobile toilets for convenience have also been provided. 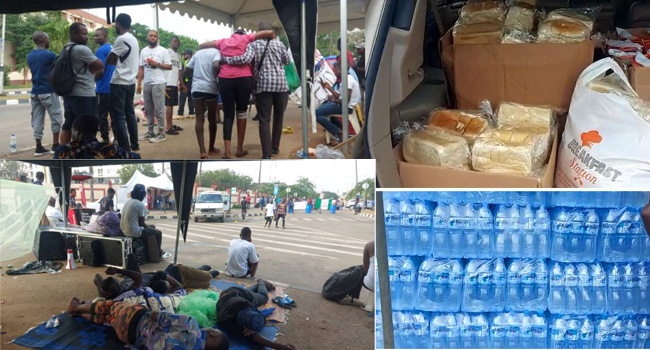 It’s a slow Friday morning for some of the protesters who passed the night at the protest ground in Alausa, as they opt for more sleep before the apparent busy day ahead.

Private security popularly known as bouncers were also hired as an alternative to security.

Some protesters were attacked by thugs on Thursday morning, an action already condemned by the state government but law enforcement agencies are still nowhere near the protest area, except for those securing the government offices.

The #EndSARS protest started as a campaign against the infamous anti-robbery squad of the Police, now disbanded, but the protesters are now calling for a wider reforms in the police and advocating for better policing.