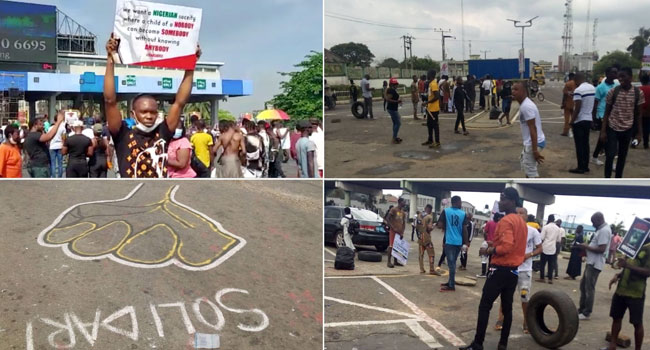 The #EndSARS demonstrations are still taking place across the country and the action appears not to have an end in sight.

In Lagos the nation’s commercial nerve centre, the #EndSARS protesters continued their call for not just an end to police brutality and bad governance, they also ask for a better welfare package for police officers.

The protesters gathered at the Lekki toll gate and started off the day by cleaning the protest environment, an activity that forms part of their resolution to leave no dirt from the previous night on the protest ground.

This they believe will be an example for those in authority to understand how proper organization can propel the nation forward.

After cleaning, they proceeded to pray and the stage was set for the day’s activities.

Similarly, protesters have started their demonstrations in other states across the country, with a focus on unity and progress for a nation where the youths are given the opportunity to thrive.

In Abuja, the nation’s capital, hundreds of young people barricaded the Kubwa axis of the Abuja-Zuba highway, disrupting vehicular movement on the road.

This is despite the ban on all public demonstrations in the nation’s capital.

The protesters had previously blocked the Abuja-Gwagwalada road, which leads to the Nnamdi Azikiwe International Airport bringing the FCT to stand still as the ensuring traffic built up in the axis spread to other areas of the city.

Delta State protest took a slightly different turn and the youths defied the rain and blocked the Asaba-Onitsha highway leading to the niger bridge.

Defying the rains, they camped at the summit junction of the highway leaving commuters stranded for hours. Even the presence of the Nigerian Army there could not deter them as they vowed to remain there until all their demands are met.

And on the other side of the niger in Onitsha, what has been termed a mother of all protests was staged along the Enugu-Onitsha expressway, shutting down the  Awka-Awkuzu axis.

In their thousands, the youths trooped out demanding the prosecution of SARS officials who have been found guilty of abusing their office and oppressing citizens.

The protesters gathered in their numbers at the Anambra state capital, Awka, from where they marched through Unizik junction, Kwatta junction and other popular areas along the Enugu-Onitsha expressway.

The mammoth moved towards Awkuzu, the once dreaded headquarters of the Special Anti-Robbery Squad (SARS) in Anambra state.

Youths in Oyo State are not left out of Sunday’s demonstrations, the young people have gathered at the State Secretariat’s entrance in Agodi, Ibadan, and there they will stage the day’s agitation, lending their voices to the calls for an end to bad governance.

The current demonstration across Nigeria has no face, has no leaders, the youths say they have nothing but their voices and until their demands are met, they will not get off the streets.