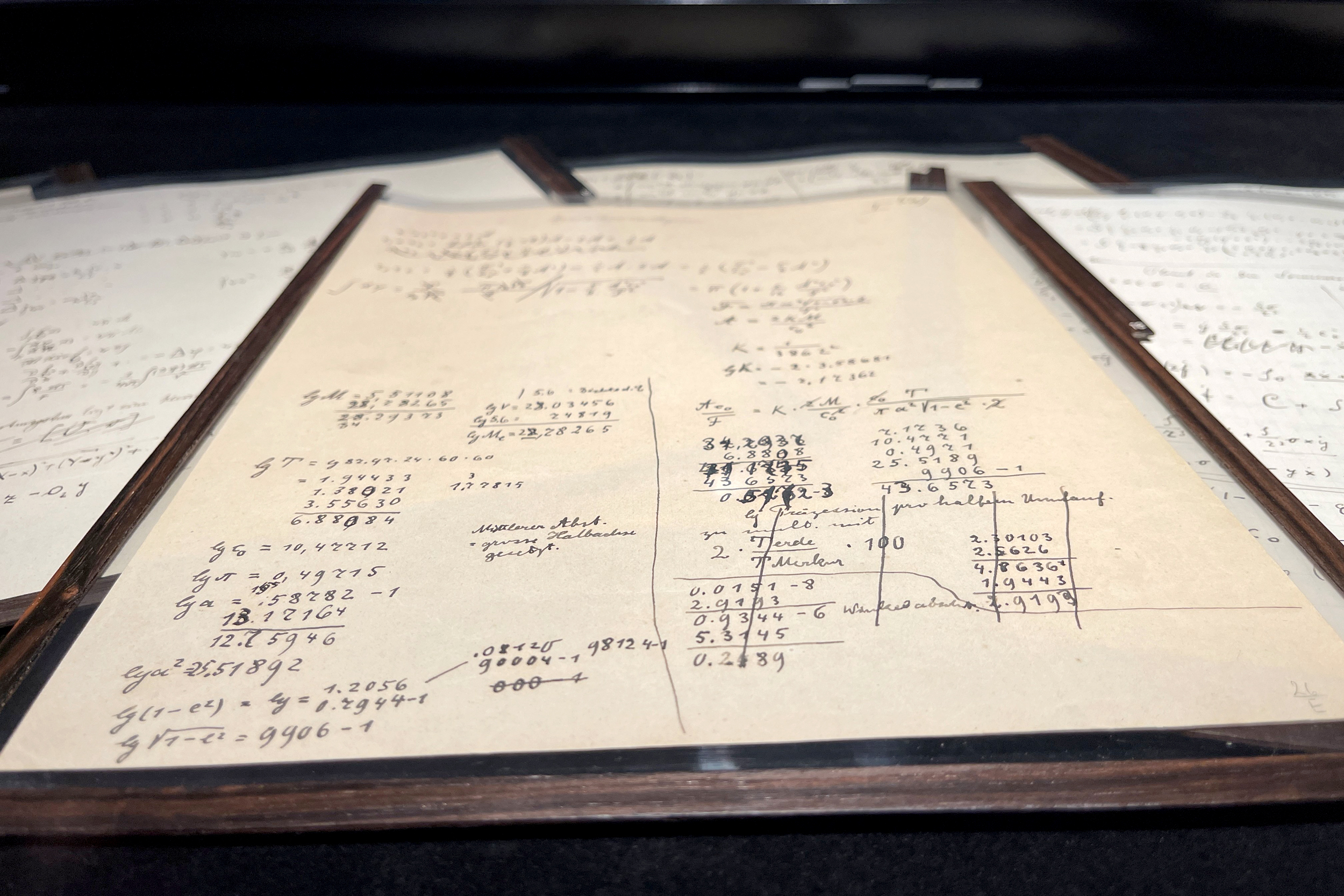 A rare manuscript featuring early calculations that led to Albert Einstein’s general theory of relativity is set to go up for auction in Paris on Tuesday.

The 54-page document is expected to fetch as much as $3.5 million, but it might have been consigned to history were it not for a decision by one of the physicist’s friends and colleagues.

The manuscript was preserved by Swiss-Italian engineer Michele Besso, who worked on the calculations with the Nobel Prize winner.

Einstein’s genius did not tend to extend to saving early drafts of his work, auction house Christie’s explained on its website, making the document all the more rare and potentially valuable.

Christie’s described the pages as “one of the most important scientific documents of the 20th century.”

Contained within them is the preparatory work that helped lead to the discovery of Einstein’s famous theory, which has continued to shape the way we view the cosmos since it was first put forth on Nov. 25, 1915, forever changing our understanding of gravitation.

The pages are filled with sprawling calculations and crossed-out symbols, mainly written in ink.

Twenty-six of the pages appear to be written in Einstein’s hand, while 3 contain entries from both the physicist and Besso, with the remaining 25 written by the latter, according to Christie’s.

“The manuscript isn’t bound, and there are many different types of loose paper, so you get the impression of a working document that’s full of energy, as if both men would grab the first page they could find to scribble their findings on,” Vincent Belloy, a specialist in books and manuscripts at Christie’s Paris, said in a statement shared by the auction house.

The duo set out to explain an anomaly in Mercury’s orbit using elements of the equations Einstein would go on to feature in his theory of general relativity.

But the pair would eventually realize that while they were on the right path, their equations were not quite right. Einstein would go on to correct his work independently, leading to his theory of relativity.

Belloy added that it was still unclear how Besso came to end up with the pages and whether he “took the manuscript or if Einstein sent it to him, asking him to work through their findings.”

Either way, Besso kept the manuscript in “impeccable” condition at his home until his death in 1995.

Astrophysicist Etienne Klein said the manuscript played an important role in forever changing “the narrative behind the birth of an incredible theory.”

In an interview shared online by Christie’s, Klein said the manuscript showed that Einstein’s discovery was not born overnight, but was the conclusion of a yearslong process.

It shows that “the foundation was laid” for the discovery years before Einstein would unveil his revolutionary theory, he said.

Bidding for the monograph, which Christie’s is auctioning in partnership with French auction house Aguttes, is expected to open at 12:30p.m. ET.

Meanwhile, a letter penned by Einstein describing “extreme anti-Semitism” in America, where he fled in 1933 to avoid persecution in Nazi Germany, is also set to go up for auction on Tuesday in Jerusalem, Israel.

In the letter, which was written to Austrian-Jewish painter Bruno Eisner, Einstein describes feeling “very lonely” and asserting that “there exists here a tremendous (degree of) anti-Semitism, especially in academia.”

In May, a letter in which Einstein wrote out his famous E=mc2 equation, was sold through Boston-based auction house RR Auction for more than $1.2 million — three times the expected amount.

Funmilayo Waheed-Adekojo:‘Whatever a man can do today, the enablement came from a woman’s womb’ | Newspot