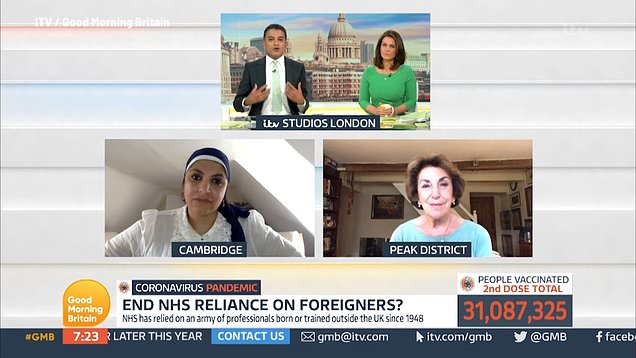 Adil Ray and Edwina Currie locked horns on today’s Good Morning Britain as they debated whether the NHS should end its reliance on overseas workers.

The presenter launched into an impassioned speech after former Conservative Health Minister Edwina suggested that the UK should focus on looking into why people trained in the UK aren’t being retained rather than taking ‘trained people from much poorer countries’.

At the height of the discussion, Adil defended migrant healthcare workers, who have saved the lives of thousands throughout the coronavirus pandemic.

‘They are British. As soon as somebody comes to this country to work here, they are then British.’

He continued: ‘This idea that we should talk about our own. Who are our own?

‘I just don’t get this idea that suddenly the migrants who have been here for 50 or 60 years and continue to come here, aren’t British. They are our own too.’

But Edwina wasn’t having any of it and likened Adil to former Good Morning Britain presenter Piers Morgan.

‘Calm down!’ she snapped. ‘Calm down, you’re turning into Piers Morgan I think you’re better than that.’

‘I don’t care who I’m turning into,’ Adil hit back. ‘We’re talking about a really important subject. Just tell me what is the difference between our own and people like my father?’

Many viewers threw their support behind Adil after the explosive scenes.

‘Edwina Currie is so rude!’ wrote one. ‘Well done @adilray for holding your own because she was not pleasant!!!’

Echoing a similar sentiment, another added: ‘I’ll be honest I was sceptical when @adilray replaced Piers Morgan on @GMB but he is definitely one of the better presenters. Argues his points with real intelligence and calmness, rather than simply shouting.’

Good Morning Britain airs weekdays at 6am on ITV.