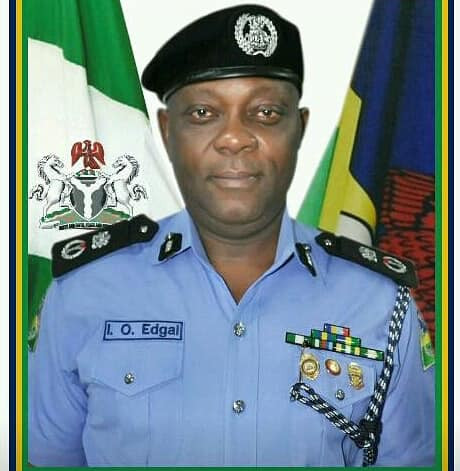 New Commissioner of Police in charge of the Nigeria Police Federal Special Anti-robbery Squad (FSARS), CP Imohimi Edgal has released special hotlines, calling in citizens to report excesses of operatives of the unit across the country.

It was gathered that Edgal, a crack crime buster was posted to the Federal SARS by the Inspector General of Police to reposition the outfit with a view of tackling violent crimes across the country. Edgal’s breakthrough in crimes during his time as the command’s boss was rated high.

As one of the 21st Century Commissioners of Police to be in charge of the Lagos State Police Command, Imohimi Edgal who was at the helm of affairs between September 2017 and March, 2019 is one cop many Lagos residents would not forget in a hurry. To the bad guys in different criminal camps across the state, Edgal was a kill joy and great obstacle to their dare-devilish activities but to the good guys, he was a hard fighter who was ready to pursue cultists, armed robbers, kidnappers, ritualists, child molesters, wife abusers and illicit drug dealers to the gate of hell.

The legacy of his robust policing in Lagos within the 18 months he held forth has continued to be remembered with nostalgia.

Having served in the Lagos State Command over the years in different capacities and becoming the Deputy Commissioner of Police in charge of operations during Fatai Owoseni’s era as the Commissioner of Police, Edgal was ostensibly on a familiar terrain. At some point, he had the opportunity to hold brief for the commissioner in acting capacity. It was during that period he led a team of crack detectives and operations men from the State Command to dismantle an emerging deadly gang of ritualists going by the name of Badoo.

The gang’s activities were already sending some residents of Ikorodu and its environs to their early graves as some helpless victims were crushed with some mystery stones to death mostly at night by members of the cult gang. At that time, there was an unconfirmed report that for each victim of the Badoo gang whose blood was soaked in white hanker-chief after being killed, the sum of N500,000 was paid by their sponsor. The spate of Badoo gang’s activities was escalating by the day and were fast extending beyond Ikorodu town and its environs, coming towards Lagos metropolis but Edgal’s operational astuteness combined with fearlessness became a serious obstacle to the blood suckers.

Man killed by hit and run driver in Anambra (graphic)

ABOUT US
Newspot Nigeria is specifically to bridge the gap between the conventional media and the growing social media, special packaging of news reports and features on socio economic and political events in Nigeria, across Africa and the rest of the world. Contact: [email protected].com
Contact us: [email protected]
FOLLOW US
© Copyright © 2020 | Developed byDominion Web
MORE STORIES

Man killed by hit and run driver in Anambra (graphic)