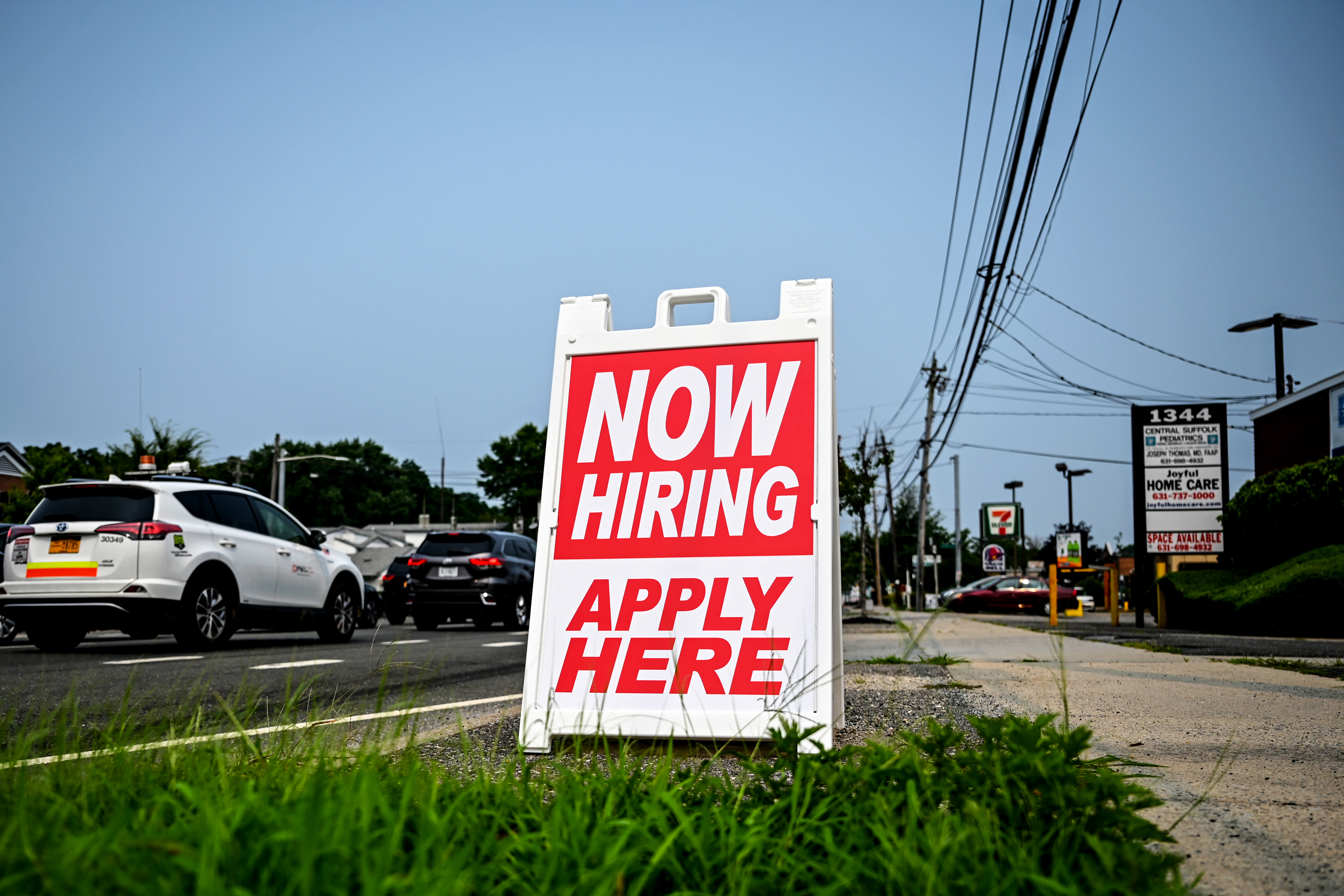 The U.S. economy added just 235,000 jobs in August, compared to the 720,000 expected by economists, in a sign that the delta variant of the coronavirus is weighing on economic growth.

The unemployment rate fell to 5.2 percent from 5.4 percent, according to Friday’s release of monthly data from the Bureau of Labor Statistics.

The data kept forecasters guessing heading into Friday’s release of monthly data from the Bureau of Labor Statistics. Weekly initial jobless claims published Thursday fell to 340,000, a pandemic-era low, but private sector job growth released by payroll processor ADP on Wednesday badly undershot economists’ projections, coming in at 374,000 rather than the 600,000 that had been forecast.

August was bracketed by natural disasters: A surge in the coronavirus spurred by the highly transmissible delta variant accelerated in August, weighing on consumer behavior and confidence. “The hit to consumers’ spending on discretionary services is clearly visible in the near-real-time data,” Ian Shepherdson, chief economist at Pantheon Macroeconomics, said in a research note.

The month finished out with the catastrophic Category 4 Hurricane Ida laying waste to buildings and infrastructure across greater New Orleans before churning up the Eastern Seaboard with a payload of deadly, record-breaking rainfall that paralyzed much of the New York City metro area.

While the data-gathering for the monthly jobs report took place too early to capture the impact of Hurricane Ida, labor experts are bracing for a wave of economic displacement that could have ripple effects on an already-distorted labor market.

After Hurricane Ida, labor experts are bracing for a wave of economic displacement that could have ripple effects on an already-distorted labor market.

“We certainly have seen that sort of impact the way disaster impacts housing ends up changing how that labor force looks, and how important it is that when municipalities are working on other recovery plans, they need to have a really considered plan to bring back their front-line and lowest-paid workers,” said Kate Bulger, senior director of business development of Money Management International, a nonprofit credit counseling and housing stability organization.

Advocates worry that the red-hot housing market, which also has triggered a spike in rents, will make it even harder for families displaced by Ida.

“Housing affordability following a disaster is a growing challenge to ending internal displacement,” a 2019 report by The Internal Displacement Monitoring Centre warned.

If there is nowhere to live, there is no way for workers to return to their jobs and — for some types of businesses — none of the customer traffic that would generate the consumer activity needed for a robust economic recovery.

“Businesses can only come back when consumers come back,” Bulger said. “When you look at these areas where there are a lot of small businesses, those people need the businesses to come back to rebuild their own homes, so it sort of becomes a chicken-and-egg challenge,” she said.

“One interesting characteristic of this labor market is we have this dropoff in the labor force, yet we still have pockets of unemployment,” said Mike Englund, chief economist at Action Economics. “Some of it is a skills mismatch, but it’s also a geographic mismatch,” he said.

Hurricane Ida has piled onto that existing dysfunction. Evacuees have been streaming into Texas, with many perilously short on food, fuel and funds, said Teressa Duesler, director of disaster response at Catholic Charities of Southeast Texas.

“We’ve had a high number of people come to us in need of clothing, food, shelter, transportation or gas,” she said. “A lot of people that evacuated here didn’t have a lot of resources with them.”

Since phone and power lines remain down in much of the hardest-hit areas, residents who have evacuated have no idea from day to day if the homes, jobs or loved ones they left behind are still there, Duesler said. “A lot of them are worried, scared, anxious and tired — there’s a lot of unknowns,” she said.

Duesler said her organization has been coordinating with other relief organizations, and she expects the number of those in need to grow in the days ahead. “We’re up to around 320 individuals that have applied for assistance with us, about 180 households, but that number keeps growing by the hour,” she said — adding that the number of Ida evacuees is much greater than those displaced by last year’s Hurricane Laura.

After a natural disaster like a hurricane, some amount of relocation is typical, but larger events tend to have a much greater impact. According to Amnesty International, Hurricane Katrina displaced roughly 200,000 people living along the Gulf Coast. While the ultimate impact of Hurricane Ida is expected to be far lower, post-disaster migration patterns still reveal structural challenges that weigh on labor market mobility and economic recovery, experts say.

“These storms are like gouges that are hitting the coastline. They’re literally body blows to the continental United States,” said Jim Blackburn, professor of environmental law and co-director of the Severe Storm Prevention, Education and Evacuation from Disaster Center at Rice University.

In 2005, the people fleeing Katrina went predominantly to Texas, Florida, Georgia and Washington, D.C. Some of the new arrivals to Texas settled on cheap but flood-prone land in the Houston area that was submerged when Hurricane Harvey struck in 2018. And some of those who weathered Katrina and remained in the area migrated to low-lying, more rural areas outside the scope of the New Orleans levee system — the very areas that were inundated by Ida.

It is a vicious cycle for many of these households, particularly lower-income families who have little by way of resources for making a fresh start in another location. “Folks who are lower-income are pushed out to these less expensive properties, but then those tend to be the ones that have less general protection because they’re in these areas that tend to flood more frequently,” Bulger said.

“What we should do is link our thinking about housing with our thinking about flooding. We’ve got to think in terms of where people may go,” Blackburn said. “During Harvey, what we found out is for low- and moderate-income people, there’s not a lot of replacement housing.”