House of Parliaments in Africa has been enjoined to learn the system and act of Parliament currently in practice in the National Assembly of Nigeria, for e-parliament, modern technology, transparency and accuracy.

Speaker of Namibia House of Parliament, Ms. Lydia Kandetu, stated this on Wednesday when she led a session of Commonwealth Parliamentary Association, African region to the National Assembly, Abuja.

Kandetu, after being conducted round the facilities around the National Assembly complex and shown how plenaries are conducted in both chambers of Nigeria’s Parliament, extolled quality displaced by Nigeria in terms of e-parliament and other facilities.

“We have learnt something from the Parliament of Nigeria today. It is a place of significance”, Kandetu, who chaired the first session of the Society of Clerks-At-The-Table (SoCATT), told Journalists after the tour.

Ms. Kandetu applauded Nigeria for installing time board and electronic voting machines for Members of Parliament during plenaries, this, she said would promote transparency, unity, accuracy and e-parliament. 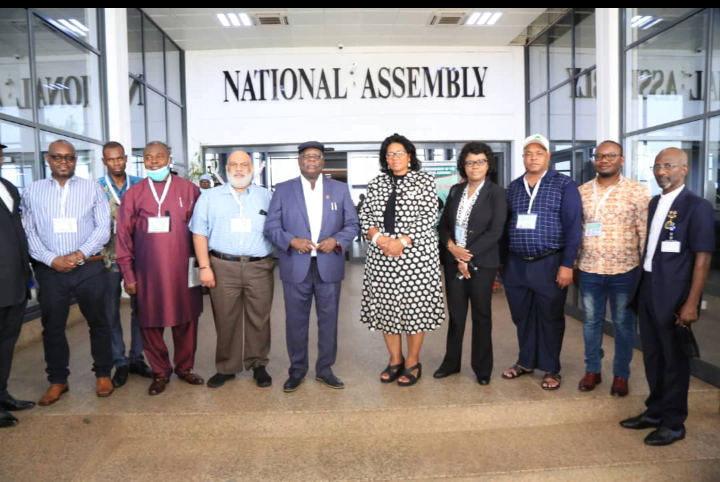 “We went inside the chamber, obviously, the rules are very strict. Although we wanted to take some photos, because when you are coming to visit any other chamber of a country you want to learn more, you want to imitate, learn something to take back to your country.

“I have seen a picture inside the chamber, where they get a board that is showing a time, whenever members are talking, a board that serves as a timekeeper for Members which informs you when your time is up on a speech or whether you have few minutes left. That is very very good.

“I have seen also, that when they have elections when the House is divided, they have to vote, there is also a board that is indicating who is for and who is against who and those that are abstaining, is very very important, that in itself, is a process of unity, it is a process of fairness, no one will come and say I did not say I was abstaining, everything will be on the board”, she said.

She added that, aside from the CPA conference, some of the delegates from the Commonwealth Parliament would be visiting Nigeria soonest, to learn more of the act of Parliament and governance, not forgetting the “rich cultural heritage of the country”.

The Clerk to National Assembly of Nigeria, Mr. Ojo Olatunde Amos, on his part, explained the workings of the Parliament in Nigeria, the most populous African country.

Mr. Amos said Nigeria’s Parliament houses a lot of facilities, which include an “ICT centre that can accommodate all participants at the CPA conference; facilities for visual meetings”, amongst others, assuring that the National Assembly complex could host a session of the SoCATT.

Nigeria currently practises a bicameral legislature, with the Upper legislative chamber, Senate, having 109 Members; while the House of Representatives, the lower chamber, houses 360 Members.

This is considered, as the largest House of Parliament in Africa, with sophisticated technologies for security and e-parliament.

EPL: What Klopp told me before I scored against Wolves –...