The glamorous event will also be filled with appreciation for everyone that has played a role in the growth and vibrancy of theatre productions in Nigeria as eight theatre offerings by DOS will be unveiled. The talented directors who would execute the respective projects will also be revealed to the excitement of the guests at the event.

Folake Ani-Mumuney, FirstBank‘s Group Head, Marketing and Corporate Communications is scheduled to deliver the keynote paper at the event.

She will critically look at the Nigerian theatre space, highlighting its role in youth empowerment, job creation and infrastructure development. The need to critically examine the value of increased funding, driven by the collaborative efforts of government-private sector initiatives and sponsorships will also be deliberated.

Ani-Mumuney will share ideas on the impact of FirstBank’s [email protected] initiative on the entertainment industry. [email protected] is created to consolidate all the Bank’s efforts in the arts, supporting the entire value chain of the creative arts, thereby providing the much-needed financing and advisory support, showcasing and facilitating the successes of the industry, and enabling industry players and the public to explore and access the wealth of opportunities the creative industry has to offer. 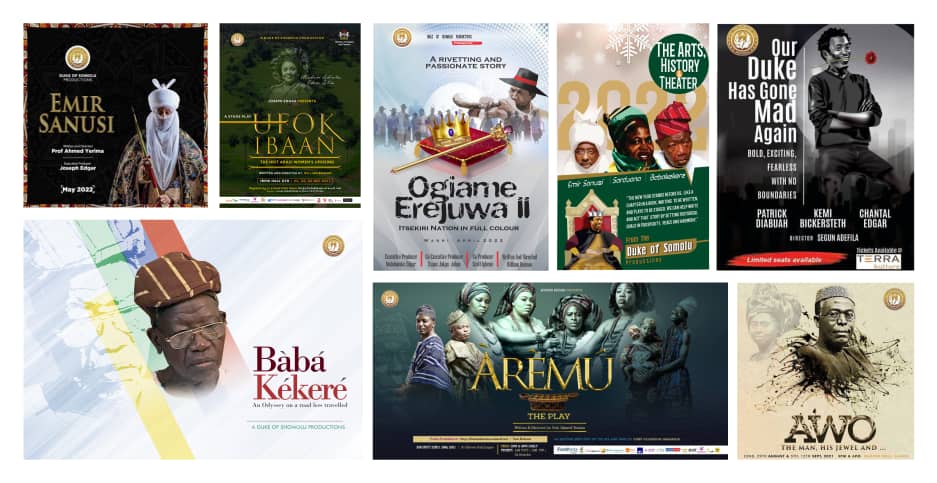 Also speaking at the session is Prof Ododo the GM/CEO of the National Theatre and Ahmed M Ahmed the Artistic Director of National Troupe.

“Coming from the back of a very successful 2021 which witnessed the historic double-decker Productions – Awo and Aremu that attracted the attendance of the former Nigerian President and elder statesman, President Olusegun Obasanjo GCFR; Vice President of Nigeria, Prof Yemi Osinbajo; the Hon Speaker of the House of Representatives, Femi Gbajabiamila and His Excellency, the Executive Governor of Lagos State, Mr Babajide Sanwo-Olu; we are poised to push the boundary with some of the most intricately woven Productions ever,” said Joseph Edgar, the Executive Chairman of Duke of Shomolu (DOS) Productions as he expressed his appreciation of the strong viewership and support DOS has received.

Already, our showing of Sarduana and Babakekere come October this year has received full funding status and its upcoming colourful showing in Warri – Ogiame Erejuwa11 is receiving very strong attention, he concluded.

Parading a stellar cast of Directors led by the influential Prof Ahmed Yerima with inspirational Makinde Adeniran, William Benson and Segun Adefila, The Duke of Shomolu Productions is poised to rewrite theatrical history.

DOS Productions is a positively disruptive force designed to aggressively push the agenda of ‘telling our stories through performances’.

In the last three years, the platform has engineered and fostered some of the most eponymous works on Nigerian Theatre audiences. Its Isale Eko was nominated by the Dancers Guild and has also received a slew of recognitions by critical audiences and experts.

Various stage plays from the stables of DOS Productions include Emotan, Aremu – The Play, 3 Some, Isale Eko, Oba Esugbaye and many others.