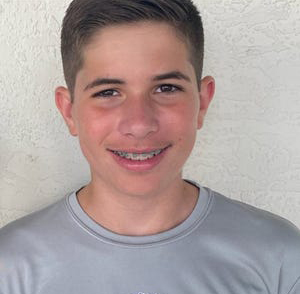 DNA on a pair of headphones led police to a “homeless drifter,” who was arrested and accused of killing a Florida boy last month in a “completely random act,” officials said Thursday.

Semmie Lee Williams Jr., 39, was booked on suspicion of first-degree murder in connection with the slaying of 14-year-old Ryan Rogers, whose body was found Nov. 16 near the Central Boulevard sidewalk at the Interstate 95 overpass in Palm Beach Gardens.

“He appears to be a homeless drifter spending most of his time in the streets of Miami,” Shannon told reporters on Thursday.

Officials don’t know what might have led to the killing.

“The incident itself appears to be a completely random act,” Shannon said. “We do not have a motive in this case and I would best describe it as an innocent child victim having a chance encounter with a very violent criminal.”

Rogers left his home on his bicycle at 6:40 p.m. on Nov. 15 before his mother called police at 10:30 p.m. to report him missing, according to an arrest warrant affidavit fled by Palm Beach Gardens Police Detective Jennifer Brashear.

“It appears to be an absolute chance encounter between a child on a bicycle and an animal that should probably not be out on our streets,” Shannon said.

Rogers’ cell phone showed he stopped moving at 7:31 p.m. on Nov. 15 and surveillance captured a man, believed to be Williams, coming into the area, Brashear wrote.

A pair of headphones found at the crime scene were swabbed for DNA and it matched DNA on file for Williams, according to the arrest warrant.

When police found Williams in Miami, he had a bloodstained bandana in his backpack and tests “showed that the sole two contributors to the DNA mixture from the blood on the bandana are Ryan Rogers and Sammie Lee Williams,” Brashear wrote.

The police chief thanked his detectives and investigators from neighboring agencies.

“Our investigators have received and followed up on numerous phone calls and other tips. Through their diligent work (and) our community support, we were able to discover key pieces of evidence to develop probable cause for the arrest of Semmie Lee Williams,” Shannon said. “They removed a very dangerous monster from our streets.”

The suspect has no known ties to Palm Beach Gardens.

“It’s a mystery to us why this man was in our community,” Shannon said. “We have evidence that places him on the scene and makes him responsible for the murder of this child.”

The public defender was assigned to Williams on Thursday could not be immediately reached for comment.

Williams has a long arrest record, police said, with alleged offenses in Florida, Georgia and California.

The arrests include aggravated assault with strangulation, battery on a person 65 or older and domestic assault, police said.