Nigerian Billionaire’s Daughter and female disc jockey, DJ Cuppy Otedola has taken to social media to celebrate her only brother, Fewa on his birthday revealing there’s no shame in being autistic.

According to the controversial Dj, via her instagram handle, noted that she’s proud of the man he’s becoming adding there’s absolutely no shame in being on the spectrum.

Sharing a photo of both of them, she wrote; ”My baby brother Fewa is 21 today! So proud of the man he’s becoming… yes he has severe AUTISM but there is absolutely no shame in being on the spectrum. He is my God-given gift. LOVE YOU SO MUCH! 💕 #FamilyFirst” 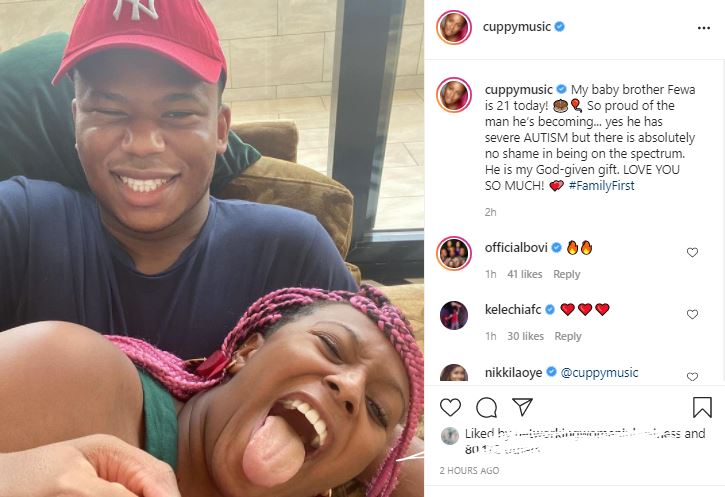 Meanwhile, the controversial Dj Cuppy, via her Instagram page recently showed off her babies, urging fans to welcome them into the family. According to Cuppy, her babies,  is a 3months old Pomeranian brothers.

She also asked her fans to follow her babies on social media for updates. Sharing a cute video of herself spending quality time with her babies; the Dj Captioned the video;“Cuppymusic just picked uPleasebies! Pleease Welcome and follow @DufuPoms Dudu ad FunFun Omonthsa are 3 month old Pomeranian brothers! #CuppyPuppy #DufuPoms”