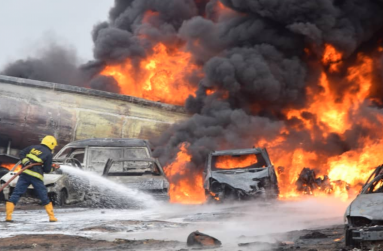 17 people have reportedly died in the petrol tanker explosion which occurred at Koko Junction on the Benin/Sapele Expressway in Ethiope West council area of Delta State.

LIB reported earlier that the Delta State Police command, DSP Onome Onowakpoyeya said the driver of the petroleum tanker was trying to maneuver a bad spot on the road when it fell and exploded.

Four vehicles were also burnt as residents rushed to scoop the product. A truck driver, Kola Akintayo who witnessed the incident told The Nation that another vehicle passing by scraped a metal which ignited a fire.

Officials of Federal Road Safety Corps (FRSC) and security agencies evacuated bodies and rushed the injured to a hospital in Oghara community.