A popular club in Abuja, Hustle and Bustle, has been shut down indefinitely following the death of one of its customers.

It was gathered that a clubber was electrocuted during an event at the club on Sunday.

In a statement released on Monday, the club management said the facility is now closed until further notice following the tragic incident.

It, however, expressed deep sadness over the situation and sympathized with the family of the deceased.

The statement reads: “We are closed till further notice. This is due to the loss of our esteemed client. We are deeply saddened by this situation and need time to heal from it.

“Our prayers are with the families of the lost soul. May her soul Rest In Peace. We sympathize with the family on this unbearable loss. Kindly bear with us as we pass through this storm.” 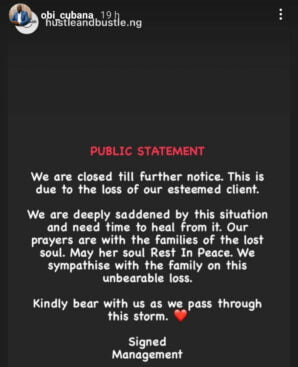 Recall that Obi Cubana was recently released by the Economic and Financial Crimes Commission (EFCC) after spending three days in its custody.

Newspot reports that Cubana was set free hours after the Nigerian anti-graft agency had said it won’t release the socialite until bail conditions are met.

Obi Cubana, who on Monday, November 1 honoured an invite to the office of the EFCC to answer questions bordering on alleged offences of money laundering and tax fraud, was held back by the anti-graft agency.

A statement from an EFCC official had noted that the businessman was expected to satisfy the bail conditions laid out by the EFCC.