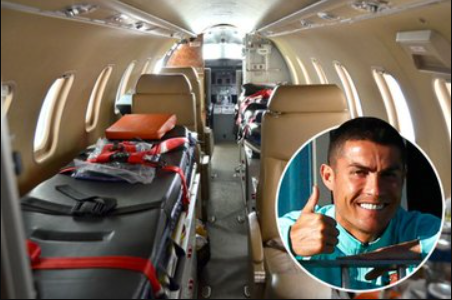 Cristiano Ronaldo has left Portugal for Italy in an air ambulance to continue his self-isolation at his luxurious home in Turin after testing positive for coronavirus while on international duty.

On Tuesday, Portugal’s Football Federation confirmed the Juventus striker returned a positive  test in a statement which read: “Cristiano Ronaldo was released from the work of the National Team after a positive test for COVID-19, so he will not face Sweden.

“The Portuguese international is doing well, without symptoms, and in isolation.

On Wednesday, October 14, the 35-year-old striker traveled back to Turin through the Tires Airport in Cascais around 1.45pm local time after It had been reported earlier in the day he wanted to fly back to Italy.

The publication said he was taken to the municipal airstrip from the Portuguese training camp base in nearby Oeiras by ambulance before traveling in a Bombardier Learjet 45XR LX-ONE which was specially equipped to fly him following his Covid positive test. The private ambulance plane is operated by Luxembourg Air Rescue which specialises in offering repatriations of those who have suffered illnesses or accidents abroad and need to get back home.

Upon arriving back in Italy he will be required to observe a period of isolation and will likely miss upcoming matches against Crotone in Serie A and Dynamo Kiev in the Champions League.

“This is how he celebrated you. Please rescue him”