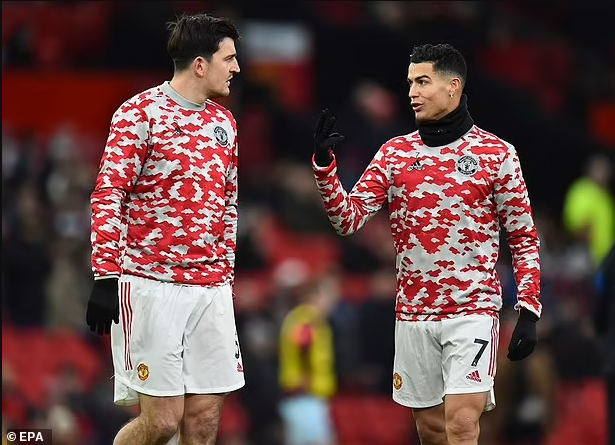 Cristiano Ronaldo and Harry Maguire are reportedly locked in a power struggle over the Manchester United captaincy at the moment.

According to a report in The Mirror, the pair have been in conversation with interim boss Ralf Rangnick about a change of skipper for the rest of this season.

The idea is that Ronaldo is handed the armband to take pressure off Maguire, but the England international is reluctant to agree as he doesn’t want to lose the captaincy permanently.

The report details that there is now a growing belief in the dressing room that Ronaldo will take over as captain, while Maguire struggles for form at center-back.

A source explained: ‘Originally, Ronaldo was asking players to back Harry. But the problem is the manager now wants Ronaldo to mentor all these younger players.

‘That’s left Harry in no man’s land, as he’s the captain and having to say and follow whatever Ronaldo says, to keep everything sweet.’

Ronaldo has been mentoring the younger players as per Rangnick’s instructions since the German arrived in November. But  Maguire is said to feel ‘marginalised’ by Ronaldo’s role in the dressing room.